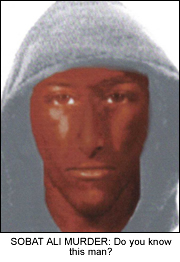 DETECTIVES investigating the murder of Walsall pensioner Sobat Ali have released an e-fit of a man wanted in connection with his death.
64-year-old Sobat Ali died on 2 January after chasing three men who robbed him of jewellery at his home in Hart Street.
Mr Ali had returned home with members of his family after buying more than £2,500 worth of jewellery for a family wedding when the robbers struck.
His daughter-in-law was also slashed across the arm with a knife as the robbers snatched jewellery from the pair.
The man detectives wish to speak to is described as a black man, early 20s, over 5ft tall, clean-shaven and wearing a grey hooded top and a blue jacket.
Mr Ali’s son paid tribute to his father saying his death had shattered his family.
“He was a very dedicated father and was always bringing a smile to our faces. He was very kind and down-to-earth,” said Mr Khan.
Anyone with information to assist the police inquiry is urged to ring 0845 113 5000 and ask to speak to detectives at Walsall police station or contact Crimestoppers on 0800 555 111.
Related Articles:
Walsall mugging horror