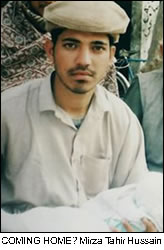 A LEEDS man who faced the prospect of being hanged for the murder of a taxi driver has had his “nightmare” come to an end, his brother said after Pakistani authorities commuted his death sentence.
Amjad Hussain welcomed the move after campaigning for the past 18 years on behalf of his brother Mirza Tahir Hussain.
The 36-year-old from Leeds, West Yorkshire was convicted of murdering taxi driver Jamshed Khan in 1989. He always maintained his innocence saying he acted in self defence.
Hussain’s death penalty had been postponed on numerous occasions following appeals by his family. Last month authorities scheduled a new date of 31 December after Hussain was originally scheduled to be hanged during a five-day state visit to the country by Prince Charles.
But news of President Musharraf’s decision to spare him the death penalty has been welcomed by his family.
Brother Amjad Hussain said he was “overjoyed” at the news.
“I have this morning received a phone call from the Pakistani high commission, who confirmed the decision of Gen Musharraf to commute the death sentence,” he said at his home in Leeds.
“The family are overjoyed that, at last, the death sentence has been lifted. At last the 18 years of nightmare appears to be coming to an end.”
In more good news for the family, Hussain may also be eligible for parole because he has already spent 18 years in prison.
MEP Sajjad Karim, who has lobbied on behalf of Hussain, said he hoped to see the Briton return home very soon.
“Mirza Hussain has done in excess of 18 years in custody,” Mr Karim said. “Therefore, the next step we will be pushing for is an immediate release. Hopefully, Mirza will be returning back home to Leeds very, very soon.”
The news was also welcomed by Amnesty International. International UK Campaigns Director Tim Hancock said: “Amnesty International welcomes news of the commutation of the Mirza Tahir Hussain’s death sentence.

“We know the family of Tahir are extremely relieved after their exhausting campaign, but they are also anxiously awaiting official news of the terms of the commutation. The family are grateful that President Musharraf has used his discretionary powers to commute Tahir’s death sentence on humanitarian grounds.

“Amnesty is also waiting to hear exactly what will happen to Tahir next. The priority is Tahir’s safety and his swift and safe passage back to the UK.”