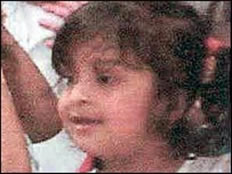 A TEENAGER who took part in an arson attack on a house in which a six-year-old girl died has started an eight-year sentence in a young offenders institution.
Daryll Tuzzio, 18, was part of a “wicked plan”, Birmingham Crown Court was told, to terrorise victim Alisha Begum’s older brother, Abdul Hamid, who had formed a relationship with the sister of Tuzzio’s friend Mohammed Foaz Ahmed
Tuzzio had earlier been found guilty of the manslaughter of Alisha Begum.
The six-year-old died after her home in the Perry Barr area of Birmingham was engulfed in flames.
In Sentencing, Mr Justice Field told Tuzzio: “You allowed yourself to be recruited by a friend, Mohammed Foaz Ahmed, to join a wicked plan to set the Begum family house on fire.”
He added Alisha’s brother Abdul Hamid had formed an innocent relationship with the 16-year-old sister of Foaz Ahmed.
“In the view of Foaz Ahmed, Abdul Hamid had to be taught a lesson. He had to be terrorised by a fire set at night in the family house to punish him for his defiance and to force him never again to have contact with Meheran so that the Ahmed would have no difficulty in marrying Meheran off to someone of their choice.
“It must be clearly understood that such actions can not and will not be tolerated in this country.”
Mr Justice Field told the court a threatening call had been made to Abdul Hamid warning him to end his relationship with Ahmed’s sister.
The following day Tuzzio bought petrol and went to the house despite knowing there were people in inside.
A masked man kicked open the front door and sprayed petrol in the hallway.
Alisha’s other family members managed to escape the blaze but she was trapped inside.
She was rescued by firefighters but died in hospital the next day.
After the sentencing Alisha’s elder brother, Abdul Mumin, said: “My sister was murdered in the most horrible way. This man has got eight years, but my sister has got no more years.”