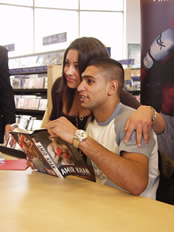 British boxing hero Amir Khan created quite a stir in the centre of Birmingham today where he was greeted by screaming fans as he unveiled his autobiography ‘A Boy from Bolton’.
The 19-year-old, made a stop at the Borders book store in the Bull Ring as part of a nationwide tour promoting his new autobiography which charts his rise from a local Bolton boxer to a professional superstar.
Hundreds of screaming fans had waited for the boxing sensation since the early hours of the morning hoping to catch a glimpse of their favourite star.
Speaking to The Asian Today just moments before meeting his fans, Amir said he was excited to be meeting his fans in the city.
“This is the first time I’ve come to Birmingham and I’m really looking forward to meeting my fans here”, he said. “The signing today will give me a great chance to chat to them and thank them for their support.”
He also revealed he was instrumental in making sure his book signing tour stopped off in Birmingham. “When I was told about the signing tour I was very keen to come to Birmingham because there’s such a big Asian community here and it’s great to be able to meet a section of them today.”
Amir’s book signing tour has taken him across the UK including Scotland and Dublin, and his hometown of Bolton where Amir described reaction to his book as “incredible”. 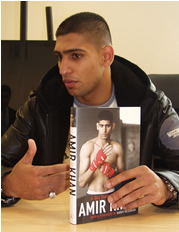 At 19 years of age, Amir, who admits fame hasn’t changed his outlook on life, defended his decision to write his autobiography at such a young age saying so much had happened in his life already.
“At 17 I went to the Olympics and it’s still fresh in my mind and I really wanted to tell that story before I start forgetting the smallest details that made the journey so special”, he said. “There are only a handful of people that know the Olympic story so while it was fresh in my mind I wanted to share my experience.”
Amir’s autobiography also deals with his rise as a British Asian role model. In the aftermath of the London bombings, he famously dedicated his first victory as a professional to the victims of the attacks, instantly becoming a hero.
But he denied being a role model came with its pressures, saying his honesty in life inspired his young legion of fans.
“I’m just working hard and being honest in everything I do which is great for youngsters to take on board. It’s great that youngsters do look up to me and hopefully they’ll be inspired to stay on the right path and work hard in life.”
And working hard is what Amir has in mind as he gears up for his next fight on the 9th December in London.
Although his opponent remains a mystery at this stage, Amir is still firmly setting his sights on the world title. A fete, he tells The Asian Today, he will definitely complete within the next five years. A prediction we can all bank on!