Home Interviews Don’t be so ‘fast’ to judge 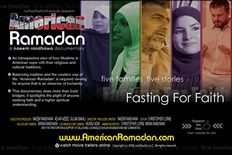 As millions of Muslims across the world undergo the holy fasting month of Ramadan, one American filmmaker has attempted to open up the fasting experience through a special documentary which shatters stereotypical illusions of modern day Muslims.
In his directorial debut Naeem Randhawa offers American Ramadan, a unique film which not only attempts to redirect people’s perceptions of Muslims and Islam, but also tries to build bridges between all faiths. In post 9/11 America where Muslims are continually under the watchful gaze of the state, the media’s role in contributing to typical Muslim stereotypes has also heightened. Earlier this year hit American show ‘24’ was forced to make changes to its storyline because of its highly negative portrayal of Muslims. But it’s through the media that Naeem Randhawa is attempting to shift the pattern of thinking.
Speaking to The Asian Today editor Zakia Yousaf, Naeem discloses his reasons for pursuing the film as well as revealing what life is really like for an American Muslim post 9/11.
What was the motivation behind American Ramadan?
The motivation for the movie came a year ago, when I was looking for something to inspire me for the upcoming Ramadan month. I looked around to see if there was any film or media that I could watch, not finding anything contemporary – I decided to “get off the couch”, and do something about it myself.

The idea was to create a small 15 minute video following 1 family for a day or two. After viewing what we captured, I realized I was onto something – the content was very rich, and the concept demanded to be expanded to cover a more complete view of the Ramadan experience.

Flash forward to a year later, and we went from the simple 15 minute video idea to a full-blown feature length, one hour, documentary, that follows 5 very diverse families, across 2 states, and commentary from nationally renowned scholars from the Muslim, Christian and Jewish faith.

The film is doing phenomenally well – and that’s because we went so far with it, and really tried to get under the surface to bring out the emotional roller coaster that Muslims and everyone goes through. It is being screened in schools, film festivals, mosques, churches.., and we’d like to see it continue to shed a positive and realistic light on Muslims, and how they live their lives.

Was it difficult getting the families together to appear in the documentary?

We sent out emails, and posted for families to participate in this project – and we had a fair amount of folks that replied. However, we went out of our way to make sure we didn’t find the “typical” Muslim family that you see in the media – long beard, full burqa, etc… We wanted to reflect the diversity of Muslims, and chose the individuals and families that covered a good cross-section of the community. Hence, we get the story of a student, divorced dad, inter-racial couple, a convert, and a lady whose husband is incarcerated.

This selection has played very well with Muslims and Non-Muslims. Muslims see themselves in these families on the screen – and in many ways so do Non-Muslims. It makes them much more accessible as people – too often in Muslim productions, the subjects are “perfect” – we wanted to avoid that, we wanted to reflect the hopes, fears, challenges and dreams that we all share.
The documentary seems to present Muslims from a ‘realistic’ perspective. This is to say they are not all bearded terrorists as often seen on the American screen. Were you conscious of the way Muslims are stereotyped like this when coming up with the concept of America Ramadan?
The Council on American Islamic Relations (CAIR) has been publishing surveys about how Americans perceive Muslims. And post 9-11, these statistics show that this view of Muslims is getting worse by the day. However, an interesting pattern that was identified was this – the more people learn about the religion – the less negative their view is of Muslims and Islam.

Our goal was to pick these families, so that everyone could relate to them, and hopefully we’re breaking some of the extreme negative stereotypes that have been pervasive on the big and small screen.

Earlier this year television network Fox made changes to the show ‘24’ because of the way it portrayed Muslims. In what ways does your film challenge the way Muslims are portrayed in the media?

My film shows Muslims are just like everyone else, dealing with the same issues, and Muslims want the same thing that everyone else wants – security, happiness, freedom.

There seems to be a turning point now, of how Muslims are portrayed in the media – and I believe, we, as Muslims need to be part of that solution. We need our own voice in the media – and if we don’t, others will speak for us!
Are documentaries like America Ramadan needed more so now in light of 9/11?
Absolutely, American Ramadan, and movies like it, that reflect the Muslim experience are very much needed. And I think they are needed for Muslims, as well as the Non-Muslim audience.
This has been a much underserved market, and also globally there’s a heightened sense of curiosity about Islam, this is evidenced from the existing and new productions that come out – these films are usually very successful, because of the demand from the general public. So it is critical for the community to invest in media projects –we need to supply this positive and realistic image in independent and mainstream productions.

For you how has America changed from a Muslim perspective since 9/11?
They say that some good usually comes with the bad, and I believe this to be true. Yes, there’s been a tremendous amount of negative repercussions to the Muslim community here and globally, but the amount of interest in Islam has never been so strong. I know of many many Muslims who’ve also re-discovered their resolve to their Faith, I think we’ve perhaps learned to value our faith much more, after realizing and witnessing how easily it can be hijacked by a few. The number of convertions (or reversions) to Islam has gone way up, hijabs seem to be becoming more popular, and just a general sense of curiosity in the religion is on the rise – of course, there’s still a lot that the community as a whole needs to do.
Are there any political messages in the documentary?I specifically went out of the way to ensure that we did not get into politics. Not that I think that’s not important, it is, this film though is not the place for it. This film is about bridge-building, discovering what we all share in common as human beings.

Intisar Hamdan’s husband is incarcerated, and of course, she is not very happy with the American government – but we steered clear of her political views. If we had gotten into any of that – I think the focus would have shifted from the Ramadan experience to the politics of the day. – that’s not something I wanted to do.

There’s plenty of great political movies out there that cover the political and social issues of the day.

What type of audience did you have in mind when making American Ramadan?

Originally when we were making the short video, it was really for the Muslim community – but as the idea started growing, we kept thinking of what the Non-Muslim audience would be experiencing as they watched the film.

So our focus shifted from purely a Muslim audience to trying to serve both audiences. Based on feedback we’ve gotten – I think it’s working, the Muslim audience gets inspiration from it, and Non-Muslims get an insight and maybe some education out of it.
The documentary has been selected for selection for three film festivals in Dallas. How does that make you feel?
Myself, and the film crew, Nathan Lewan (editor), Imran Randhawa (Dallas co-producer), and Murad Aldin (Los Angeles co-producer) couldn’t be happier about the reception of the film so far.

We all thought the film would be pretty good – but the response has been overwhelming – it is being aired around the world through networks like GeoTV, Link TV, Bridges TV, and PBS – I hope to find media networks in England that are interested in bringing it there and Europe.
What other projects have you got lined up?
I’m brainstorming with other right now, about some concepts we may want to start production on. There are so many good ideas, and negative stereotypes that need to corrected – Muslim women, the hijab, jihad…the list goes one, we may pick one of these and do a real in-depth documentary on what these things mean. Another concept in people who find their faith after going through some struggle or devastation in their life – I’m interested in the motivation and reasons why people come to Islam – that may be another project we work on.
For more information in American Ramadan log onto www.AmericanRamadan.com