Home News Miss India to be crowned at Mela extravaganza 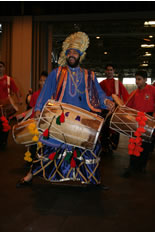 A Midlands Asian beauty pageant event will unveil its winner at the extravagant Mela celebrations at Birmingham’s NEC next month, organisers have revealed.
The Miss India UK Finals, which has become one of the leading annual events in the Asian calendar, has switched its star-studded finals ceremony to coincide with Birmingham’s first ever British Asian Week in November.
Organisers, who are hoping this new initiative will help raise the profile of event, are already receiving hundreds of entrants for the finals.
The celebrity led awards ceremony will be hosted on 17 November, the opening night of Mela ’06, showcasing 20 of the UK’s most talented modern British Indian Women as they compete for the coveted crown of Miss India UK.
The winner will go on to represent the UK in the Miss India Worldwide Finals against the winners of thirty other nations.

Talk of the Town Media Ltd, the organiser’s of Miss India UK, has brought the high profile event to the NEC as part of the celebrations surrounding the first ever British Asian Week (13 – 17 November), an initiative led by the City of Birmingham, culminating at Mela ‘06.
Vanita Panchal, Miss India UK Director, said: “Miss India UK is now firmly established, not only as a credible platform for new British Indian talent, but also a memorable and a fantastic show for the public.
“We are thrilled that this year’s final will take place alongside Mela ’06, it provides the perfect backdrop for the event and we are honored to be playing a key part in the UK’s largest ever celebration of the contribution made to British culture by the UK’s largest ethnic community during British Asian Week.”
Graham Lock, Mela ’06 Event Director, added: “We are delighted to welcome Miss India UK to the NEC, the gala event will provide a fitting celebration for the opening night of Mela ‘06, whilst also bringing an exciting addition to the multi-faceted festivities surrounding British Asian Week.” 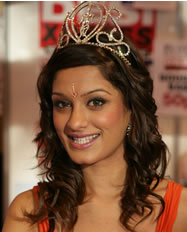 Last year’s Miss India UK winner, Birmingham’s very own Nikki Kaur Rana (pictured right) said the event provided a “great opportunity to British Indian women”.
Since becoming Miss India UK 2005, Nikki, has been busy working on a number of films, set for release in 2008.
“The contest provides a great opportunity to British Indian women, apart from the great experience of being involved in such a prestigious event, you gain great exposure, travel the world as a VIP and get the to chance fulfill many of your dreams”, she said.

The Miss India UK final will be a glamorous gala evening with performances by the very best of British Asian talent, alongside Asian stars from around the world.  The Rishi Rich Project will headline the show, whilst Hunterz, Hadiqa Kiani and Ali Zafar will perform a brand new track created as a unique collaboration specifically for Mela ’06.  Feisty female rap artist Hard Kaur will perform her latest sassy songs and Paul Chowdhry, one of the most popular Asian comedians in the UK, will offer a hilarious look at multi cultural diversity in contemporary Britain.
Log onto www.necmela.com for more information on how to enter Miss India UK.