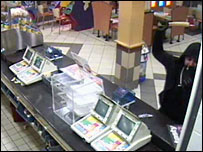 This is the moment a man wielding an axe went berserk in a busy Birmingham McDonalds’s.
Police released an image of the attacker in the hope people will recognise him.
The man, described as Asian, walked into the McDonald’s branch in Small Heath, Birmingham and demanded terrified staff hand over money.
Customers fled in panic as staff handed over money.
The incident took place on Sunday evening. Police said no-one was hurt but staff were shocked and upset.
The man is described as a 6ft, Asian, aged between 25 and 30 and wearing a dark, hooded, zip-up jacket.
Anybody who recognises the man are asked to contact detectives at Stechford on 0845 113 5000 or Crimestoppers anonymously on 0800 555111.