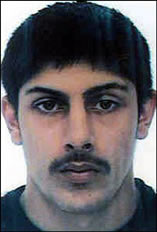 DETECTIVES in Birmingham have launched a murder inquiry after a 19-year-old lost his fight for life after being savagely attacked by 15 youths.
Gurdeep Singh Mann (pictured right) was rushed to Birmingham City Hospital after he was battered by a vicious mob in Smethwick on Saturday night.
Detectives, who today confirmed they were quizzing seven people, aged 15 to 20, in connection with the attack, believe he was walking with a friend when he was savagely attacked by the 15-strong group in Windmill Lane, Smethwick.
A post-mortem examination revealed he died of head injuries.
Police today were still unsure of the motive for the attack but urged witnesses to come forward.
Det Insp Paul Homer, from Smethwick CID, said: “There are seven people currently in custody on suspicion of murder who are being questioned.
“The deceased was attacked by a number of youths and, having been out trying to trace them, we now have seven people in Detectives are still appealing for witnesses to come forward, particularly passengers from two vehicles.
A police spokesman said: “This investigation is now a murder inquiry.
“We are still appealing for witnesses, including the drivers and passengers of a metallic green 4×4 and a dark coloured Ford.”
Anyone with any information about the attack is urged to call Smethwick CID on 0845 113 5000.