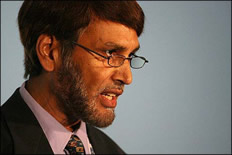 A LEADING Muslim figure has slammed the Sunday Telegraph newspaper for “misrepresenting” his words in an interview published on the front page of the paper.
Dr Muhammad Abdul Bari (pictured right), Secretary General of the Muslim Council of Britain said the paper was guilty of “unfair distortion” when it published its story under the headline “Muslim leader warns of 2 million British Terrorists”.
Mr Bari, who became the newly elected head of the organization in June this year, was quoted as saying the country could face up to 2 million terrorists if the police and media continued to “demonise” British Muslims.
“There are a few bad apples in the Muslim community who are doing terrible acts and we want to root them out”, Dr Bari was quoted as saying in the 10 September issue of the paper.
“But some police officers and sections of the media are demonising Muslims, treating them as if they’re all terrorists – and that encourages other people to do the same.
“If that demonisation continues, then Britain will have to deal with two million Muslim terrorists – 700,000 of them in London”.
The Muslim Council of Britain said it was “shocked” and “dismayed” at the paper for “misrepresent[ing]” Dr Bari’s words.
In a statement posted on their website, Dr Bari said: “”I was interviewed on Thursday by the Sunday Telegraph’s David Harrison. I am quoted in his story today as allegedly saying that if the demonisation of British Muslims in the media continues then ‘Britain will have to deal with 2 million Muslim terrorists, 700,000 in London.’ These are categorically not my words. What I had in fact said was that ‘sections of the British media should not treat as terrorists the two million British Muslims, of whom 700,000 reside in London.’
He added the newspaper only “serve[d] to underline the manner in which the views of Muslims are so often misrepresented by sections of [the] UK media”.
Mr Bari meanwhile became the first Muslim representative to address the TUC Congress on its opening day earlier this week when he urged Muslim workers to join trade unions.