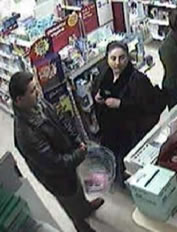 DETECTIVES in Leicester have released CCTV images of two suspects they wish to identify in connection with a theft from Boots in Uppingham.

The incident happened at 5.25pm on Saturday April 29 when the thieves entered the store on High Street and stole nearly £1,000 worth of Max Factor cosmetics.
Adam Ploszczanski of Uppingham local policing unit said: “We are asking members of the public to look carefully at these suspects and if anyone recognises them please contact us.

“We’ve followed several lines of enquiry so far and are releasing this image in the hope that some new information comes into light.

“Do you remember seeing these people in Boots? Perhaps you know of a couple who match the description who are selling or have sold Max Factor cosmetics at cut price. If you have any information we’d urge you to get in touch.”

Anyone with any information is asked to contact PC 1681 Adam Ploszczanski at Uppingham LPU on 0116 222 2222, follow the instructions to leave a message for a police officer and when prompted key in the officer’s identification number 1681. Alternatively contact Crimestoppers, which is free* and anonymous on 0800 555 111.