Russell Razzaque on his new film 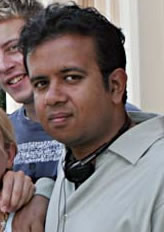 The annual Bite the Mango Film Festival has in the past showcased the best in British-Asian film talent. ‘East is East’ and ‘Bend it like Beckham’ have all progressed to bigger and better things after appearing at the festival. This year, director Russell Razzaque (pictured right) is hoping his debut film ‘Halal Harry’ will take off in the same way when it premieres at the festival. The film, described as a ‘thought provoking Brit-Asian tale of love, faith, family, burkhas and bacon’, tells the story of London barman, Harry who attempts conversion to Islam in order to win the heart of the girl he loves. With an all-star cast including former Hollyoaks regular, Andrew McNair, Goodness Gracious Me star Kulvinder Ghir, Gurdial Sira of Bhaji on the Beach fame, former Coronation Street favourite Bruno Langley, and newcomer Yasmin Ijaz, the film has been tipped as a must see.
Speaking to the Asian Today, director Russell Razzaque talks about his reasons for making the film, and reveals how his cast and crew remarkably missed being at the centre of the 7/7 Aldgate bombing.
What was the motivation behind Halal Harry’?
Well the story of a white guy converting to Islam to further his relationship with a Muslim girl is a very common scenario indeed. I have seen it many many times and I think there are few second-generation Muslims in the UK who have not known it amongst their circle of friends. As a concept it lends itself well to a”fish out of water” style comedy and also to ultimately spread a message of tolerance and harmony between cultures.
It also presents an opportunity to show Islam in a moderate, welcoming and egalitarian light – and how often does that come across in the media these days? So for all those reasons I felt it was a film that just had to be made and a story that just had to be told.
The film will be showing at the Bite the Mango film festival later this month, how optimistic are you of its success?
Very. We focused group tested the film during post-production and the scores we were getting were phenomenal. Young Asians, our target audience (and one of the biggest movie-going populations in the UK) were enthralled from start to finish – the reason they gave was that they felt they could identify with it to an enormous extent. This didn’t surprise me all that much really, as so much of the material is based on real life experiences. Even when we were auditioning actresses for the main roles we found they were amazed with how true to life the script was “oh my God I have been in that scene myself!” is a common response. Hence my optimism.
The film highlights generational issues within Muslim families an area that can be quite amusing. Were you at any point worried some Muslim audiences might be offended with some of the caricatures you paint in the movie?
Not really as the caricature nature of the bad guys is deliberately set out to contrast with the moderate and tolerant nature of the central Muslim characters i.e. Aisha’s parents. So it’s not younger generation vs older generation, so much as average Muslims vs the few intolerants on the edges. In the end I’m trying to show how peripheral, out of the mainstream, and frankly laughable to the rest of us, extremists are in the Muslim community. The only people who will be offended by that is the extremists themselves and, a) they don’t watch movies much and b) they’re offended by pretty much everyone and everything anyway.
In an article in the Telegraph last month you write how your experience at university of meeting Islamic extremists was written into the film. Did other personal experiences make it into the film?
Yes lots. As I said, the story itself is one I have seen in friends and family and traits some of the characters are based on people I know.

Former Hollyoaks actor Andy McNair and newcomer Yasmin Ijaz play the lead roles. At what point during auditions did you realise they were right for the parts?

Well casting, for me, is like fishing. The wider the net you cast the more likely you are to get what you want. So we auditioned and auditioned and auditioned until I had, for each character, a eureka moment. As for Andy and Yasmin, the minute they walked through the door and got into character they just instantly became the people I had in my head when I first sat there on my laptop writing them. They instinctively got what I wanted them to be and also brought another layer of creativity and energy to each role that has made working with each of them – from audition through to post production (still working with them, yes, in fact doing some studio recording work with Yasmin tomorrow) a pleasure.
On a Muslim website forum, a member writes “Sounds like a “lets take the mick out of Muslims” kind of film’ in response to the films tagline. (If the mountain won’t come to Mohammed, then Harry will go to the Mountain dressed as Mohammed) What are your thoughts on this?
Well, I understand why that is an assumption given how such negative portrayals are commonplace these days. They’ll just have to wait to see the film to really understand what it’s about and when they do
I’m sure (if they are part of the mainstream majority – just like all the young people who we screen tested the film with and all the young Muslims who were involved in making it) they’ll see it differently as a more accurate and positive take on Muslims in the UK.
You were filming Halal Harry’ when the 7/7 attacks took place. What was the mood on set?
Very sombre as you can imagine. We were supposed to be filming at Aldgate itself on that very morning but ended up shooting elsewhere after a last minute schedule change. But, like all Londoners that week, we stood firm and insisted it wouldn’t stop us going to work and so all came back the next day and, in fact, my crew came back doubly enthused. We knew the film had a greater purpose now – to show the world that there was another way for Muslims to be – to leave in peaceful coexistence. The message of the film suddenly became a whole lot more pertinent and therefore a whole lot more powerful.
How does directing a film compare to your other profession as a psychiatrist?
Well one has fed the other to a large extent. When I worked as a psychiatrist I developed a great insight into the many facets of human nature and permutations of character, as well as dynamics and what makes people tick. This has really helped me create, in my writing, what I believe to be realistic and moving characters capable of drawing audiences in. That is the most rewarding aspect of writing for me.
What do you think of the film’s comparison to ‘East Is East’?

Well East is East is one of the first generation of Brit Asian movies that blazed a trail for the rest of us in subsequent years. Each successive generation of films has, however, in many ways become increasingly authentic and I think this is the real unique proposition of Halal Harry – it is very much a film made by Muslims, about Muslims and so possesses a degree of genuineness about it that has rarely been seen before.
Do you have your next film project lined up?
Yes I do but, due to the success of Halal Harry and interest it has already generated so far, I am in a lot of talks about the next projects and, yes there are more than one, but as this is all ongoing
I’m afraid I can’t really tell you about them but we’ll let you know for sure when the time comes.
For more information on the film log onto www.halalharry.com
Interview by Zakia Yousaf