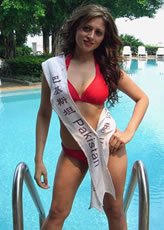 A bikini contest model who claimed to be representing Pakistan has sparked controversy after a government official claimed she was not a genuine entrant.
Stunning Mariyah Moten (pictured right), 22, who has dual Pakistani and American nationality, hit the headlines after she won the ‘Best in Media’ title for being the most photographed and interviewed contestant at the pageant in the Chinese resort of Beihai.
Her win was seen by many as a sign of changing times in Pakistan where many women do not venture out without the hijab. But in a country where beauty contests have not been held for a number of years, government officials said they would begin investigations as to how Ms Moten came to represent Pakistan at the ‘Miss Bikini’ contest.
“We have asked our missions in Washington and Beijing to investigate this because it is against our policy, culture and religion,” senior Culture Ministry official Abdul Hafeez Chaudhry said.
“She is an American passport holder. She is an American national of Pakistani origin, so how did she get entry as a Pakistani?”
But the model hit back saying she had successfully broken down barriers.
“I have broken all the barriers, and in the coming years there will be other Pakistani contestants who will carry this title,” Moten, described by Pakistani media as the country’s first bikini queen, told the Times of India newspaper.
“My intention was to project Pakistan in a very modern way.”
Moten was born and brought up in the Pakistani city of Karachi. Her family moved to the United States eight years ago and she is now based in Houston.