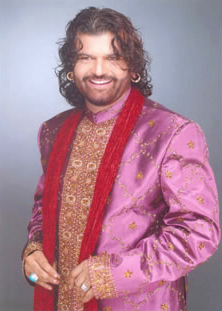 Hans Raj Hans, one of the best-known names in Indian music, has chosen to perform a concert of songs in the Sufi style at Birmingham’s Symphony Hall later this month.
The show, which is expected to be a sell-out, will see the star grace the Symphony Hall stage on Friday 22 September.
Hans Raj Hans is internationally renowned for the unique quality of his voice and a repertoire that spans bhangra, film music and classical songs.
In a Birmingham exclusive, this concert is the first chance ever to see him perform Sufi music at a major public concert in Europe.
“I love singing for films, but my driving force is still Punjabi folk songs and Sufi songs which bring me closer to almighty God,” says Hans Raj.
“Particularly at this time, the Sufi message of love and peace is vital to build bridges with our neighbours and across continents.”
Born in the Jalandhar district of the Punjab, Hans Raj Hans remains one of the few artists who has succeeded in bringing original Punjabi folk music to prominence in the Indian music industry.
He began singing as a child, having been inspired by the street singers who visited his village to chant devotional songs. Under the guidance of Ustad Puran Shah Koti, he developed into a versatile singer, with a unique voice based on the Indian classical technique and a gift for improvisation.
Hans Raj Hans has worked alongside some of India’s most distinguished composers, including the late Nusrat Fateh Ali Khan – with whom he also sang on the film Kache Dhage. He has released 15 albums including the particular favourites Jogian De Kana Vich and Kook Papiye Wali.
WIN TICKETS TO SEE HANS RAJ HANS!
The Asian Today have teamed up with Symphony Hall to offer one lucky reader the chance to get their hands on a pair of tickets to see Hans Raj Hans at the Symphony Hall.
To be in with a chance of winning, all you have to do is answer the following question:
Q: With whom did Hans Raj Hans sing on the film ‘Kache Dhage’?
Is it:
If you think you know e-mail your answer to zakia@urbanmedialtd.com
Closing date: 12pm Friday 15th September
The winner will be notified by e-mail