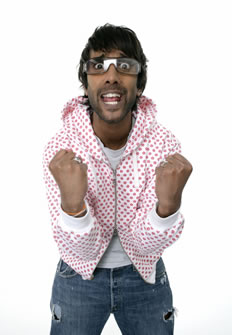 Get ready for Premiership football like you’ve never heard it before… not just all the goals, not just all the gossip, but also all the glamour and all the grimness that’s all part of the beautiful game, served up at breakneck speed and mixed in with the hottest big tunes and even hotter hyper-interactivity from listeners.
If it doesn’t sound like a traditional football show then that’s maybe because it’s aimed at very untraditional fans – for the other big difference about this Saturday afternoon spectacular is that it’s on the BBC’s Asian Network, aimed at an audience not normally noted for its football fanaticism.
“Everybody immediately associates Asians with cricket, and yet there are hordes of Asian football fans too,” points out the programme’s presenter, Nihal – another break with convention, as he’s first and foremost a music DJ, both on Radio 1 where he and Bobby Friction play the best Asian beats each Wednesday night, and also a hot property in clubs worldwide. “You only have to see the likes of Wolves and Sunderland, who have their own Punjabi armies,” he continues enthusiastically. “So we want to represent just how fanatical Asians really are about football.”
Perhaps surprisingly, it’s actually the most popular sport among the Asian community nowadays – so the time is ripe for the new show.
“At the World Cup there were Asians going abroad to support England and there was a lot of coverage of that in the media,” Nihal comments. “We want to make sure that we keep that going and it’s not just a press story on a quiet day; it is something that is genuinely there. But also, while Asians support teams and are really into football, there is still a distinct lack of Asians actually going to the games and feeling like they would be made welcome, and that’s also a barrier that we want to overcome.”
And they’ve got the support of the Premiership and the FA to that end. “They’re very excited about the show,” Nihal grins. “With their help, and from the clubs themselves, we’re going to go out and do interviews with the players.”
But true to the show’s ethos, they won’t be asking the same-old standard soccer stuff…
“We’re going to play them Asian tracks and see which ones they rate and which ones they don’t like as much!” Nihal smiles, explaining, “music is a great in with players; they love to club, they love to go out and dance and some of them are very, very knowledgeable about music.
“And music and football are so interlinked these days. Kids’ shows used to want pop stars, actors, film stars – now they want footballers as well. Football is ghetto glamour. I’m intrigued by footballers – often people have this perception of them as being overpaid, arrogant, petulant people; we just want to get on a level with them, chat to them, have a laugh, ask them some cheeky questions,” he says, adding that the show will tend towards the irreverent.
“We’ll probably get into a bit of trouble,” he admits, adding with a grin, “and if we don’t we’ll be disappointed!”
Tottenham Hotspur fan Nihal – who went to the same school as Glenn Hoddle in the die-hard Spurs area of Essex in which he grew up – is expecting some stick for his unapologetically partisan views, but the 35-year-old is relishing the chance of some fierce and funny footy banter with listeners. “It’s my personality,” he laughs. “If I dish it out I’ll have to be able to take it.”
He’s recently used his outspoken side and gift of the gab as part of London’s 2012 Olympics bid and continues to be involved in the Olympics areas of education and the arts. “I want the disenfranchised kids who live around that area, and indeed up and down the country, to see how the Olympic movement can relate to them and how they can relate to it. It’s a horrible word, but how are they going to be stakeholders in that Olympic vision?” he says. “There’s going to be a lot of posh people from the Establishment talking about that – our job is to make sure they do something about it. I hope I’m strong enough and brave enough to be able to do that.”
He’s also pushing the agenda of the arts to the establishment at the British Council where he recently became a board member. “The British Council is all Sir this and Lord that, so getting a joker like me involved is quite interesting for them!” he grins.
Nihal certainly has a busy schedule. He has also been deputising on prime-time Radio 1 recently and running his regular Bombay Bronx club night – which raises money for tsunami victims and Teardrop Relief – but he was determined to take on the football show as well.
“It’s an honour for me,” he enthuses. “I wanted to do a show for the Asian Network that could connect with the wider 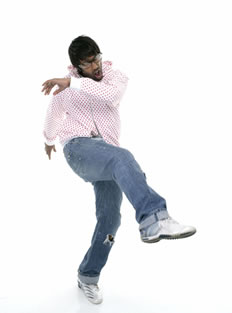