Home Interviews Back with a Bang!

Sanjay Dutt on being Munnabhai! 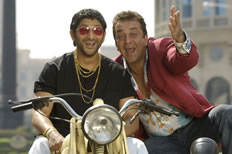 When filming began on ‘Lage Raho Munnabhai’, the eagerly awaited sequel to ‘Munnabhai’ the production crew expected to have a stress free day. But such is the hysteria surrounding the film, they were immediately mobbed by hundreds of screaming fans. The star of the film, Sanjay Dutt, couldn’t have imagined the reception – people waved from balconies of Marine Drive buildings, men clambered on top of bus stops, cars just stopped in the middle of road and the police had a busy time controlling the hysterical crowds. This was the scene at almost every location of filming. Later this month the film will be released across cinemas across the country and the hysteria is not accepted to subside. ‘Lage Raho Munnabhai’ is expected to be one of the biggest grossing films this year. The Asian Today caught up with Sanjay Dutt to find out what he thought of all the hype surrounding the film.
There is this story that while casting for Munnabhai, you were cast for Zaheer. Is this true?
Yeah. See, Vinod is like a brother for all of us. He called me and said he had a role in mind for me. I initially thought I was being offered the role of Zaheer. When Vinod offered me the role I was under the impression it was for Zaheer until he told me he wanted to cast me as Munnabhai. I’m so grateful and honoured I got to do Munnabhai and I think it’s one of those characters that will live forever.
What do you love about the character?
He’s honest, he’s humble, he’s not pretentious, and he’s unbelievable. I mean like there’s one scene in Lage Raho where Jhanvi says ke kal Gandhi jayanti hain. He doesn’t even know who Gandhi is. He’s so simple. Its such an honest scene where I am asking Arshad ke Gandhi kaun hain, that scene on the bike. So these are unbelievable qualities of Munnabhai.
After the success of MBBS, what were the general reactions?
I will tell you this in 2-3 words. Everywhere in the world people call me Sanju baba. But after MBBS it all changed. They call me Munnabhai. So it’s that kind of an effect.
There are rumours that a special range of ‘Munnabhai’ Dolls is in the pipeline. How would you like your character to be immortalized in plastic?
Yes they wanted to do this doll thing. I mean how they do for Batman, Spiderman and all, they wanted to make Circuit and Munna’s doll. You press the button and all those dialogues will come – Mamu and this and that. I told Vinod about it. May be he will. I will talk to Vinod about it.
How many times have you seen MBBS?
I have seen 50 times. The other day it was coming on Zee I think. You know how many calls I get. People just don’t want to change the channel. I mean once they are seeing MBBS, they are done. It’s unbelievable.
There are some hardcore ‘Munnabhai’ fans out there. Have you come across any stories about these fans?
You know I read an article in Readers’ Digest and it was about this guy who was had diabetes without realising it. And he saw Munnabhai and remember the climax when he is talking about the symptoms in front of that whole school. He realised he had the same symptoms and he got saved. I have met so many doctors, I mean I travel a lot. They come and say this is an education for us just to see Munnabhai. I mean we forget the human touch.
What message does Lage Raho carry?
Non-violence, peace. I mean people have forgotten Gandhiji’s teachings. It’s all brought back through Munna and I think its a very amazing film. It will revive Gandhiji back. Gandhiji’s teachings will come back.
How will you rate Munnabhai with the current crop of films?
Munnabhai is an honest film. We are not trying to prove a point. I feel that’s complete cinema. It’s so honest. And I just want to thank Raju for giving me the opportunity to play Munnabhai. Raju is non corrupt and everything about him is from the heart. The film is made brilliantly only because of his honesty. Just to say no to people after MBBS, its unbelievable. I mean I couldn’t do that. I mean you have to survive in the world, you have a wife, kid and after MBBS success just to say no it’s incredible. And that’s why his movies are so honest because he is honest. I think he’s one of the best directors.
Your sister Namrata was saying that during this film you often openly talked about the scenes you’d shot and that you’ve never done that. What made you want to do this?
You know for an actor good work is the ultimate thing. I used to come back from the sets, I use to narrate them the scenes. I think it was all down to the fact that I really enjoyed this film. Even MBBS. 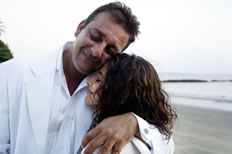 Did you have any pressure doing the sequel because as a norm, sequels don’t work?
See, I didn’t have the kind of pressure what Raju must have had. You know I had to go Munnabhai. For him to make a sequel and to make it better than MBBS was a big challenge. And you know how many drafts and how many .. Munnabhai was a lawyer sometimes.. till the time this came up. For him to even think and make a script like that is unbelievable. Vinod and him and whoever is involved.. is unbelievable.
How can you relate with Munna?
Yeah I could relate with Munna a lot. Its just like what I said, honesty, warmth, love, emotions, helping people. So I do relate with Munna.
Tell us about Vinod.
Vinod is like family yaar. I mean when my father died he was the first person I called. He loved Munnabhai more than anybody else. He’s a very straightforward guy – if he doesn’t like you, he will tell you I don’t like you. He’s so passionate about his work. I remember doing MBBS and we hit a rough patch where nobody was buying the film. People were saying it was a bad movie but he was honest with me and said that he would give it to me in writing that this movie was going to be one of my biggest movies. You just need to see his passion. Its unbelievable.
Are you waiting for Hollywood version?
Oh yeah, I wish they start shooting. I wish I could be there on the sets, You know it would be a great moment for me just to be there. See Chris Walker be the Munna.
There was one moment on location when you literally had problems shooting because of the crowds. You said that you never seen this kind of a crowd in your career. Munna and Circuit have become such cult figures.
Yeah. These people have not come to see Sanjay Dutt or Arshad, they came to see Munna and Circuit on a bike, on a road. It just freaked people out. I mean I have never seen scenes like that before in Bombay. The other day Arshad told me that he couldn’t believe the amount of crowds I pull. But I said it wasn’t pulling any crowd – its’ Munna and Circuit!
Just from marketing point of view, what does Lage Raho have to offer to people?
Lage Raho, like MBBS has a message of non-violence. It’s hilarious and it’s fun. It’s rare to see a film like that. A friend of mine in Chicago saw MBBS 200 times. And for him to say Lage Raho is even better than MBBS is unbelievable.
You became more involved in Lage Raho. What was the reason behind this?
I know I was more involved in Lage Raho than in MBBS. I became more comfortable doing Munna. Before coming onto the sets where we shot the first scene in Dhobighat, I must have seen Munnabhai at least seven times before coming to the set just to get into Munna. You know after three years to maintain that honesty, that dignity everything, its very tough. Even Arshad had a tough day.
What are your thoughts on Vidya as an actress?
We have worked together in Parineeta and I know she’s a really great actress. She’s done so well. I can tell you that nobody else could have played Jhanvi except for Vidya. She’s a wonderful person, very warm in heart and a woman with respect and dignity.
Tell us about that cancer hospital where you took DVDs of Munnabhai.
I went there couple of months ago, somewhere in Bandra east where there are almost all kids. They were suffering from cancer. And they requested me to come there, they wanted to meet Munna. And I couldn’t believe it. And they wanted DVDs of Munnabhai. So I went there and there were 20-25 kids there and all of them were saying give us Jadoo ki Jhappi! So this is the kind of effect Munna has over them.
What are your thoughts on the recent violence to hit Mumbai?
It’s an act of cowardice I mean killing innocent people. I mean it’s the worst thing anybody can do targeting innocent people who are coming back from work. To do something like that, it’s terrible but I think the people of Mumbai are tough. Freedom to me is one of the most important things in the world and we all take it for granted. So I think we should all value it and cherish it.
Lage Raho Munnabhai is on general release now