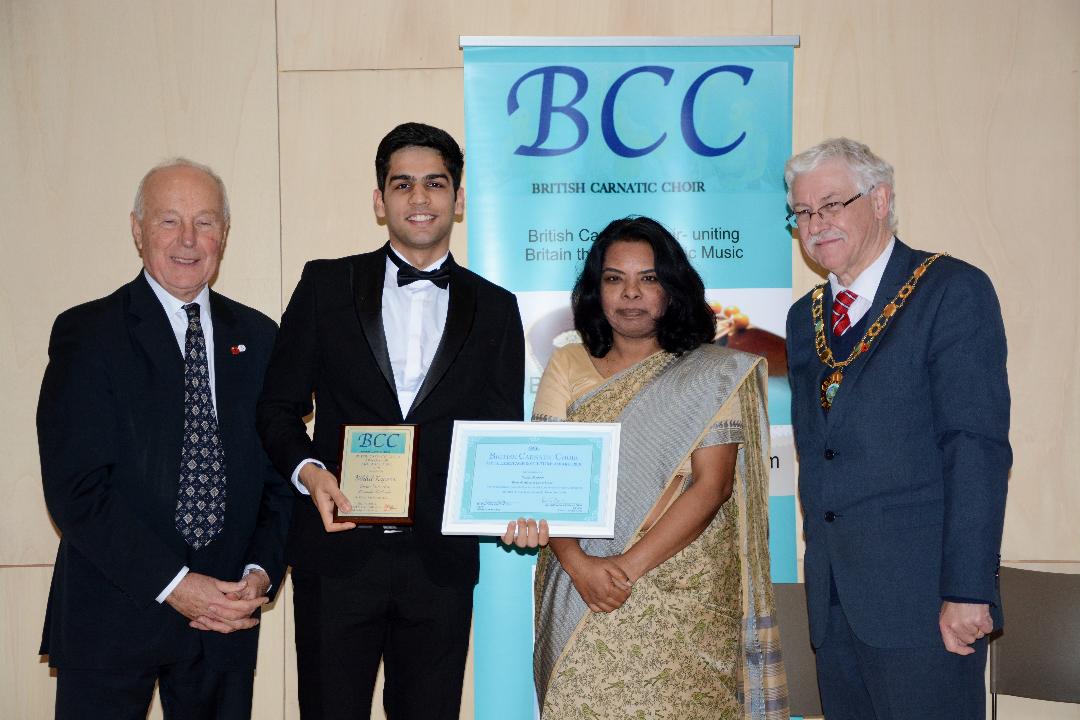 This year’s World Music Conference has once again been hailed a huge success.

The festival, which attracted expert speakers, over 100 school children from all abilities from across the West Midlands and representatives from over 12 countries, was organised by the British Carnatic Choir (BCC) and hosted by Aston University in Birmingham last Friday (Nov 8).

The core objective of this year’s event was to raise awareness of links between music and mental health and well-being.

The event also featured two panel discussions with 16-24 year-olds, the themes for which were:

Introduced this year were the Midlands Young Ambassadors of Music Awards where educationalists, parents and guardians were encouraged to nominate children and young people for their flair for singing, playing instruments, dance, or anything related to music. Winners of these inaugural awards were:

Anupama Harish– She has won the BCC’s Patrons Award for 3 successive years and is a Grade 3 violinist.

Maisie Stewart– A member of the National Youth Orchestra of Great Britain. A violinist, Maisie is currently at Solihull Sixth Form.

Sami Rao–  A Year 11 student at Sutton Coldfield Grammar School for Girls, Sami is a viola player. She is an inspiration to her peers.

Ankita Sai Ananth Kumar– Music is her passion and she enjoys entertaining audiences. Her passion lies in music from both East and West.

A second set of awards, the BCC annual awards, were presented to those who have demonstrated excellence in the Arts & Culture sector, through innovation, passion and pride in the work that they undertake to make a positive difference to the lives of individuals and communities. Winners of these awards were:

Stuart Birnie– Head of the Music Services, Services For Education

This year’s event was supported by Aston University, West Midlands Combined Authority, the Consul General of India in the Midlands and NHS Mental Health Trust Foundation. The keynote address was given by Professor Martin Levermore MBE DL, Chief Executive of MDTi Limited.

Once again, this event saw a large representation from Commonwealth Nations. Last year delegates were encouraged to sign a life-size ‘World Music Conference’ card which was delivered to HM The Queen by the event chief organiser, Dr Chithra Ramakrishnan FRSA.

“We are hugely proud of HM The Queen and all that Her Majesty does for our nation but also for the Commonwealth. This card was a token of our respectful gesture to Her majesty for embracing the sheer cultural diversity that we have here in Great Britain”.

“Music has a phenomenal effect on mental health. This multidisciplinary conference brings young people, leading researchers, mental health practitioners, communities and music professionals together from all backgrounds to share their perspectives about the positive benefits of music through their work and expertise and contribute to a wider audience and their wellbeing.

“In addition to this, the conference will also focus on practical ‘’hands -on’’ musical experiences for children and adolescent people.”

Andy Street CBE, Mayor for West Midlands, had this to say:

“The festival is unique in its aim of bringing together artists, academics and music educators from across Africa, Europe, the USA and India.”

The World Music Conference, launched in 2017, aims to promote and bring together academics, musicians, experts, children and young people of all abilities representing all facets of multicultural Britain under one platform.

To find out more visit www.worldmusicconference.co.uk