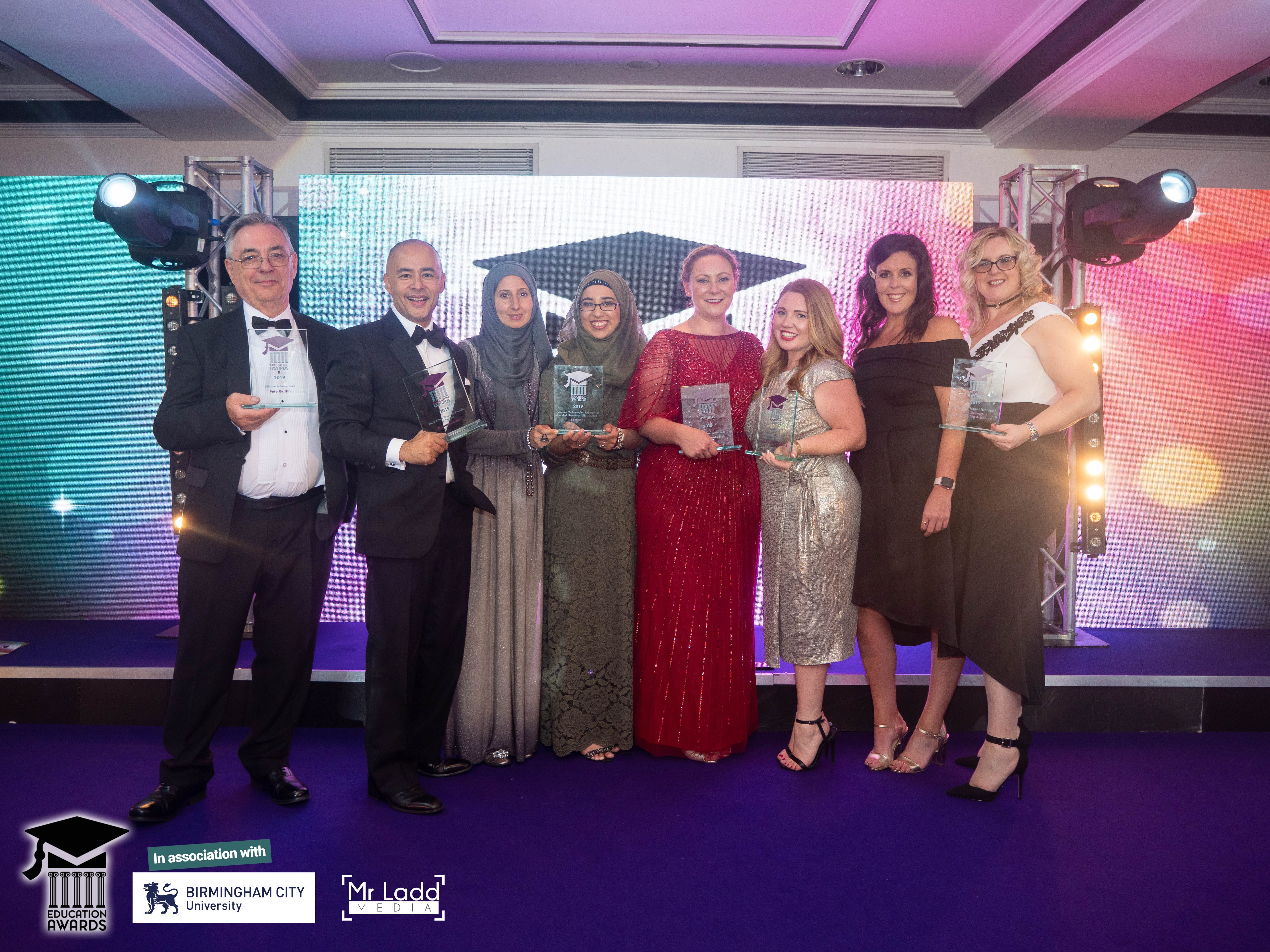 Last Friday (5th July), the annual Education Awards celebrated the outstanding contributions of those who are making a difference to the education sector in the West Midlands.

The winners of the West Midlands Education Awards were unveiled at a glittering awards ceremony at the voco St John’s Hotel in Solihull, recognising both educators and educational supporters across sixteen categories with Birmingham City University as headline sponsors.

As well as taking home the beautiful glass trophies, each winner will have the opportunity to work with their category’s industry sponsor on a project that will be filmed and showcased at next year’s awards.

For the first time, the awards partnered with the Pearson Teaching Awards with all winners being automatically entered into the televised ceremony, which gets aired on BBC’s Classroom Heroes.

Guests were entertained throughout the evening by Presenter Phil Oldershaw, there was an energetic live performance from students at Aston Performing Arts Academy and a hugely inspiring motivational speech from Charlie Fogarty MBE.

Charlie, from Solihull, is a talented footballer who suffered a life-changing brain injury in 2012. He has since rebuilt his life to continue playing the sport he loves and has used his experiences to deliver motivational talks to everyone from school pupils and hospital staff, to aspiring young footballers.

Debbie Westwood, Headteacher at Christ Church CE Primary School, says: “I’m absolutely thrilled for my little school! We are privileged to work where we do in Sparkbrook, which is one of the most deprived areas of the city.

“The area means even more to me as I was born there, so I love the community and the staff, parents, students and families who make my job so much easier because it’s such a special place to work.”

Dr Asha Patel, Innovating Minds, continued: “We were up against some amazing organisations that operate on a national level, so to be announced as the winner was a huge shock! This is particularly great for the team as they’ve put some much effort and hard work in to Innovating Minds, which has grown incredibly quickly over a very short space of time.

“It’ll be a huge boost to take this award back to them and celebrate the amazing work they all do.”

Innovating Minds exists to nourish young people’s mental health. They work in educational settings to support by upskilling educational staff and enabling young people and their parents to have access to specialist psychological support.

Jas Rohel, CEO & Founder of the Education Awards, added: “The West Midlands has a great community of individuals supporting the education sector and making a difference in people’s lives. The ceremony has been a wonderful opportunity to shine a light on their achievements and give them the recognition they deserve.

“We’d like to congratulate both the winners and finalists for the tremendous work they do and for being part of such a wonderful event. A huge thank you also goes to our sponsors, ambassadors, judges, organizers and all those who attended and supported the awards.”

Following on from previous success, the awards will also be held in Manchester, with hopes to expand elsewhere in the UK throughout 2020.

Educational Supporter of the Year

Sponsored by The National Energy Hub

Headteacher / Principal Dean of the Year

Teacher / Lecturer of the Year

Secondary School of the Year

Outstanding Contribution to the Local Community

Early Years School of the Year

Primary School of the Year

Educational Resource Provider of the Year

Entrepreneurial Education Establishment of the Year

Further Education College of the Year

University of the Year