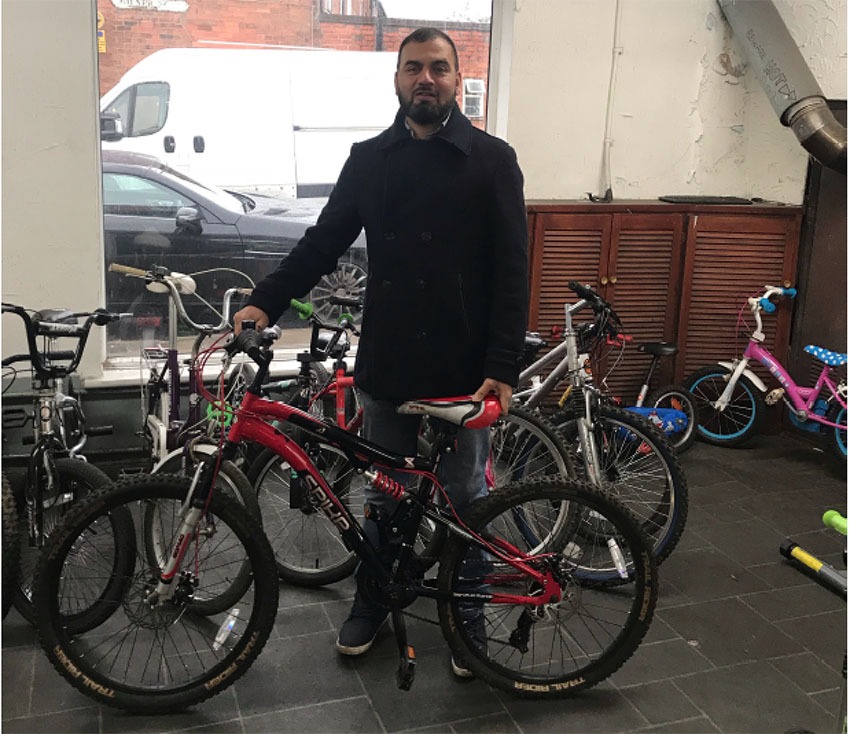 A Birmingham bike shop is helping Christmas come early for scores of children from low income families after peddling ahead with a charity initiative.

Bargain Bikes, in Selly Park, aims to give away 100 bikes to local youngsters, in time for Santa’s visit this Christmas, then deliver a further 400 free cycles next year getting the local community on two wheels as part of a unique recycling campaign.

Bike shop owner Sajid Ali Mahmood, 41, from Tyseley, has joined forces with The Green Organisation – an international, not for profit environmental group that has been recognising and rewarding environmental best practice since 1994.

Sajid, known to his friends as Ali, is now urging people to donate old and unwanted adult bikes.

For every old bike donated he will then give away a nearly new child’s bike to local youngsters.

He said he came up with the idea as part of his Christmas appeal to help the less fortunate on his doorstep.

Ali said: “Christmas should be a special time for kids, regardless of their family’s financial circumstances.

“We want to play Santa Claus to 100 children who might otherwise not get much of a Christmas present but we now need local charities including The Rotary Club, The Round Table and food banks in the area to help us locate youngsters who could benefit from this.”

He added: “We managed to attract the support of The Green Organisation by making it a recycling initiative as well – so we are asking the public to donate any old adult bike – even one that may be rusting away in their sheds – and for every one donated we will give a good-as-new cycle to a needy local child. “Ali said the old bikes could be dropped off to his bike store and workshop on St Stephen’s Road from now until Christmas Eve.

He said the giveaway would promote fun, fitness and well-being as well aiding recycling to prevent cycles ending up in public waste tips and landfill sites.

Roger Wolens, founder and managing director of The Green Organisation, said: “Ali came to me with his idea and we are completely behind it.

“Not only will it give a lot of unused, unsafe old bikes a new lease of life – but it will make 100 children extremely happy at this very special time of year. I am sure the West Midlands public and charities will respond and show their true Santa Claus spirit.”

Ali, a former footballer who had his Derby County career cut short by injury whilst an academy youngster, added: “Ask anybody and they will remember their first bike.

we can keep fit and avoid problems such as obesity and diabetes because we all know cycling is a great activity whatever age you are.”