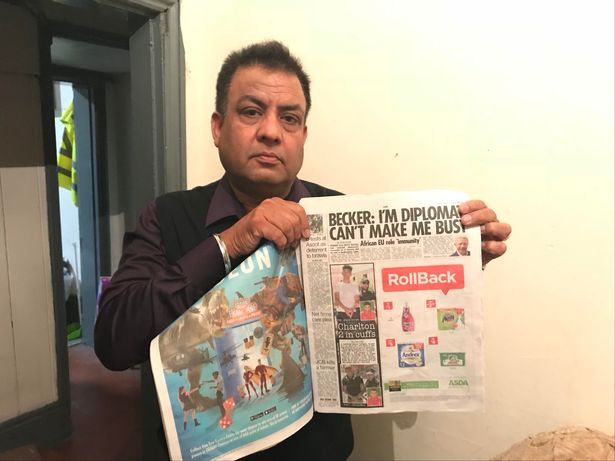 An Asda shopper has been banned from every UK branch after a row over fabric conditioner.

Mulkh Chumber, 53-year-old a shopper from Staffordshire bought ten bottles of Comfort Creations at his local branch after seeing an advert that the prices were slashed.

Mr Chumber visited the Wolstanton store and had expected to pick them up for £10, rather than £30.

The newsagent owner was left gobsmacked when staff told him the ad was wrong and the products had only been reduced to £2.

Rather than fork out £20, Mr Chumber refused to leave the store – and Asda called in the police.

Staffordshire Police have since revealed they are not taking any action against the customer.

Mr Chumber saw the advert in a copy of the Sun newspaper.

Mr Chumber said: “I went to the customer service desk and told one of the workers about this issue and was told they were £2.

“I showed her the advert, which stated they were £1, and she said it was subject to availability, even though the shelves were full.

“Then I was told it was selected stores only.

“But they could not tell me where the offer was available, and I was told I would have to put them back.

“The Asda staff called security and they told me they would call the police if I did not leave.

“I did not leave, the police arrived, and I spent half-an-hour with the police explaining the situation.”

Mr Chumber has now shifted his shopping allegiance to Morrisons.

He added: “Asda security staff handed me a letter saying I am banned from every single Asda in the UK and I was shocked.

“If something is advertised at a certain price then you should give it to the customer at that price.

“I used to go to Asda three or four times a week and have never had any problems before.

“I can do without them and go to Morrisons instead.”

Police have revealed they were called to Wolstanton Retail Park at 11.55am on June 15.

A police spokesman said: “We were called to reports of a man being abusive to staff. The man, in his 50s, was spoken to by officers at the supermarket.”

Asda has confirmed Mr Chumber’s ban remains in place. It comes just weeks after shopper Andrew Gregory was banned from Asda’s Tunstall store following a row over the toilets.

On Mr Chumber’s ban, an Asda spokesman said: “We would have honoured the advertised deal but do not tolerate abusive behaviour towards colleagues.”