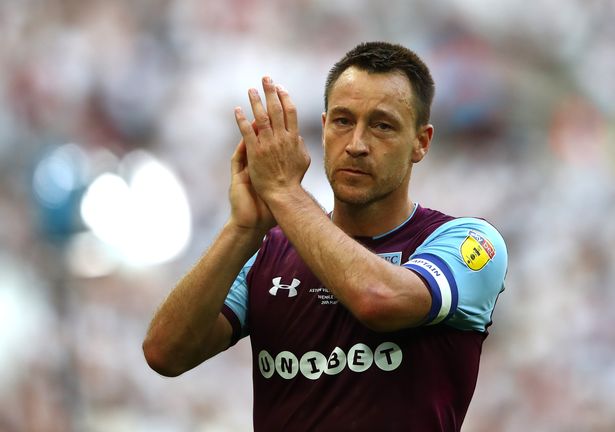 Captain John Terry has left Aston Villa after they failed to  gain premiership promotion to Fulham.

Terry joined the Midlands giants last summer with the aim of helping to return Villa to the Premier League after their relegation in 2016.

The team failed with a 1-0 loss to the Cottagers at Wembley and Terry left the national stadium a devastated man and his manager Steve Bruce confirmed that the club no longer had an option to extend his contract by one year.

A statement from the club confirmed: “We would like to place on record our most sincere thanks for the effort and professionalism he showed with us last season.

“I have given my everything this year both on and off the pitch and I’m still hurting today that we never managed to get back to the Premier League, where this club 100% belongs.

“I would like to thank Steve Bruce who was instrumental in me joining Villa.

“I have learnt so much from him as a manger this season that will stay with me forever.

“Also, I’d like to thank all the staff and players and our owner Dr Tony, who it was a real pleasure and honour to work with everyday.

“Finally, a special thank you to the Villa supporters who have supported us both home and away in their thousands, up and down the country and have been amazing to me on a personal level.

“Villa will always have a place in my heart and I will look back on my time here and think about how close we were to reaching our goal.

“But now going forward, I would like to wish the management, staff, players and supporters good luck for the future”.