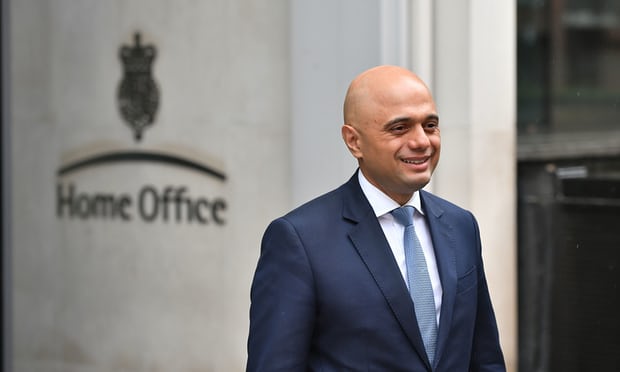 Mr Javid is the first BAME holder of one of the great offices of state.

Born in Rochdale, he is son of a bus driver who has risen to the top of British politics. His parents were born in India but fled to Pakistan while small children. His father arrived in Britain in the 1960s Mr Javid has said he came with £1 in his pocket.

Mr Javid said he would review immigration policy to make sure it was fair and people were treated with “dignity and respect.

Rudd became the fifth departure from the Cabinet since last year’s snap general election, after admitting she had “inadvertently” misled MPs over the existence of targets for removing illegal immigrants.

Mrs May said she was “very sorry” to see her successor as home secretary leave the post, while Ms Rudd’s opposite number Diane Abbott said she had “done the right thing”.

The pressure had been rising on the former banker ever since the emergence of the “appalling” treatment of Caribbean immigrants to the UK between 1940s and 1970s – the so-called Windrush generation.

Concerns had been raised about the immigration status of the Windrush generation claims had been made of people being forced to prove their near-continuous presence in the country in order to show they were here legally.

Ms Rudd referred to the Windrush “scandal” in her resignation letter, admitting that people with a right to live in the UK had not always been treated “fairly and humanely”.

In addition dealing with the backlash over the Windrush scandal, Mr Javid will have to address concerns about increasing gun and knife crime as well a difficult counter-terror climate in England and Wales.