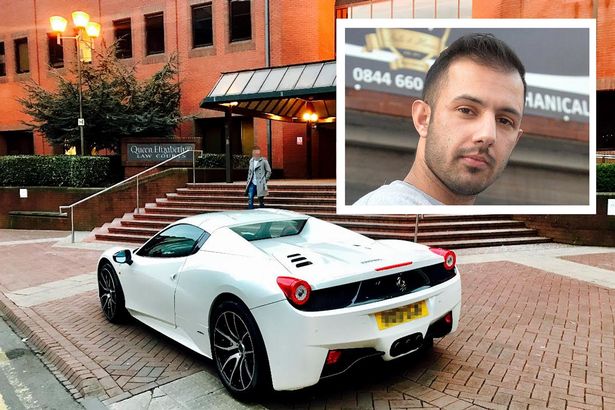 A wealthy businessman’s £200,000 Ferrari is crushed after being seized by police.

Zahid Khan, 31, saw his car get confiscated after he was stopped by West Midlands Police officers on April 5th, 2017.

Months earlier the millionaire businessman had parked the Ferrari 458 Spider on the pavement outside Birmingham Crown Court and posed for pictures.

Mr Khan said police had said they stopped him because they suspected the car was stolen.

But he said he had legitimately bought the car at auction, via a middleman, and had spent “a lot of time and money’’ on the vehicle.

West Midlands Police confirmed the Ferrari was crushed because it had no valid insurance and was a Category B vehicle – which are officially classed as unroadworthy, meaning the shell has to be destroyed.

Mr Khan has now obtained the dramatic video of the Ferrari being crushed from West Midlands Police and posted it on his Facebook page.

He claimed: “This is my Ferrari the police crushed unlawfully!

“It has taken them almost 1 year to release the video…”

He added: “I saved my ass off to buy this car and it was of sentimental value to me and my family.

“This money could have gone to a good cause, as a Ferrari broken for parts is worth more than the car as a whole!”

Mr Khan had previously told of his legal battle to have the Ferrari returned but discovered it had been destroyed when he arrived at court.

He had said: “I ordered parts from Ferrari and had them fitted by a Ferrari approved garage in Birmingham.

“The police told me they did not believe that the car was mine and that I had to prove ownership.”

He added: “I have been trying to get my car back ever since, trying to prove that it did not include stolen parts and that I was the owner.

“Then we go to Birmingham Crown Court this morning and find that the car has been destroyed.

“But I did not know anything about that and I can’t believe they have destroyed my car.”