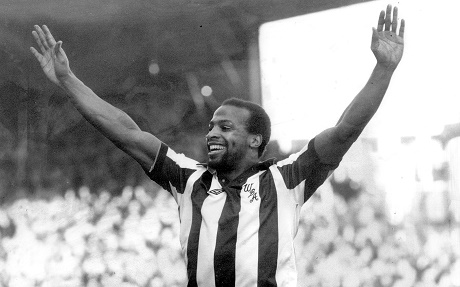 The world of football is mourning a true hero, a legend, a role model and some would say a game changer for diversity of football today.

Hundreds of people from ex-footballers, supporters, family paid tribute to the former West Bromwich legend Cyrille Regis 59 who died suddenly, on 14 January.  A celebration of his life was held at the Hawthorns Stadium where he started his football journey – and what a journey he had.

His family entered the ground to Chris Love singing Bring Him Home from the musical Les Miserables.

Fans paid tribute with chants of “Nice one Cyrille, nice one son”, and “There’s only one Cyrille Regis”.

Regis’s widow, Julia Regis, told the crowd: “Cyrille treated everyone like they were the most important person he ever met.”

She received a standing ovation after paying tribute to her “lovely, caring amazing husband”.

Ex-footballers Carlton Palmer, Les Ferdinand, Chris Hughton, Steve Bull, Dwight Yorke and John Barnes were among those to gather in the stands.

Brighton boss Hughton, currently the only black manager in the Premier League, said: “Cyrille played in an era, the same era as me, where it was very difficult for black players.

Regis was the third black player to play for England and appointed an MBE in 2008.

Back in the late 1970s Regis, Cunningham and Batson were subject to racist abuse and were nicknamed by their then manager Ron Atkinson as “The Three Degrees”. They challenged attitudes and perceptions and were a role model for black footballers and paved their ways for todays players.

His daughter Michelle said: “A legend, a gentleman, the Three Degrees – the many different names you had. But I couldn’t be more proud to call you my dad.

“Your strength made me feel protected. How are we meant to live without you now, I don’t know.”

Son Robert said: “He was a genuine family man. He was our walking, talking superhero.”

Mr Batson paid tribute to his friend and told the crowd: “We played at a time when black players endured vile abuse but Cyrille never lost his cool, nor was he ever intimidated. It motivated him to play even better.

“How could anyone think they could intimidate the big man? You couldn’t.

“We are blessed to have known him. Nice one Cyrille, nice one son.”

After signing for WBA in 1977, Regis went on to score 112 goals in 297 appearances before joining Coventry City in 1984 and helping them to their only FA Cup triumph three years later.

He was working as a football agent until his death. A great Legend who will be missed, RIP Cyrille Regis MBE.