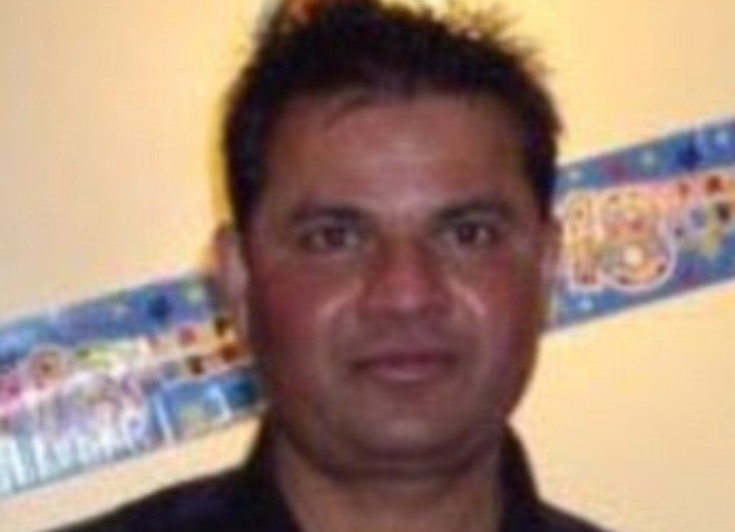 A divorced man Ashwin Daudia is on trial at Leicester Crown Court accused of strangling his former wife, Kiran Daudia.

Ashwin 51, strangled his ex-wife and hid her body in a suitcase, to prevent their youngest son from discovering the killing when he returned home from college, a murder trial heard.

The body of the mother of two , was discovered on January 17 last year close to rubbish bins, in Cromer Street, north Evington, Leicester a day after the incident took place.

This was two streets from the Daudias’ shared home in Lyme Road, where the couple had continued to live after their divorce in 2014.

William Harbage QC, prosecuting, told Leicester Crown Court: “Her body was discovered trussed up in a suitcase on the day after she disappeared.

“The person who murdered her and then disposed of her body was her former husband.”

He said the couple had an arranged marriage in India in 1988.

Mr Harbage said: “Kiran had been trying to get the defendant out of the house, but he was dragging his heels.

“In 2016 an agreement was reached whereby the house would be sold to Kiran’s sister, Preti Jethwa.

“The sale was due to be completed on January 16, the very day that Kiran disappeared

“At that point, Kiran was going to be allowed to remain, but the defendant would finally have to vacate the property.

“He didn’t want to go and made no alternative arrangements; he would have become homeless.

“This was obviously a source of tension for him.”

Kiran was employed as a part-time customer services advisor at the Next clothing firm call centre, in Gedding Road

“Within an hour she was dead,” said Mr Harbage.

The eldest son, Vivek, was living away and training as a scientist in Sheffield, but Shivam, then aged 17, was still at college locally, studying for A-levels, was not due home until 3.30pm.

Mr Harbage said: “In that period of just over an hour, there was an argument between the defendant and Kiran Daudia; there was a struggle in which he assaulted her.

“The defendant then quite deliberately killed his former wife by strangling her with some sort of ligature, probably her own scarf.

“Had this been some sort of domestic incident which got out of hand, and the defendant immediately regretted what happened, one might have expected he would have raised the alarm and called for an ambulance or the police.

“He did nothing of the sort.

“Instead, showing a remarkable coolness in the circumstances, he tried to cover up what he’d done.

“He knew Shivam would be coming home soon; he had to think fast if he was going to pretend to Shivam that nothing had happened and get away with it.

“He hid Kiran’s mobile phone, wrapped up in a plastic bag, cleaned up the scene and stuffed the cleaning materials into a suitcase along with Kiran’s coat, scarf, boots and bag.

“He crammed Kiran’s dead body into a different suitcase and wheeled both cases out into the yard, where Shivam wouldn’t see them, and he could get rid of them after dark.

“When Shivam returned the defendant pretended that Kiran hadn’t come home after work and he hadn’t seen her.

“Calls were made to her mobile phone but there was no answer.

“In the afternoon and evening the defendant was in and out of the house for periods of up to 20 minutes.”

During those trips, Daudia allegedly disposed of his ex-wife’s mobile phone and wheeled away the suitcase containing the clothing and cleaning materials.

Mr Harbage said: “He then wheeled away the other suitcase which contained her body.

“He also took a shower and changed his clothes.

“He turned onto Devon Road and then into Cromer Street.

“Just after 9am the next day, Kiran’s body was found in the suitcase close to rubbish bins at the rear of a property in Cromer Street.

“Drag marks were found coming from the defendant’s house and continuing into Cromer Street.

“Kiran’s phone was found, wrapped in plastic bags, on the roof of Tyres Galore, about a quarter of a mile from Lyme Road.”

the suitcase containing the clothing has never been found.

The police became aware of her disappearance on the evening she went missing.

Mrs Daudia always kept her phone with her and would always let people know where she was going, the court was told.

Mr Harbage said: “Following the discovery of the body on January 17, the defendant was arrested.

“In interview he maintained his innocence and said he knew nothing about Kiran’s death.

“He claimed he last saw her when she went to work in the morning and she didn’t return home.”

When charged on January 18, he said: “I haven’t killed her.”

“We say that is a lie,” said Mr Harbage.

He told the jury: “You will hear evidence in this trial, which leaves you in no doubt that the defendant is the person responsible for unlawfully killing Kiran Daudia with intent to kill her or, at the very least, with intent to cause her really serious bodily harm; that he murdered her.”