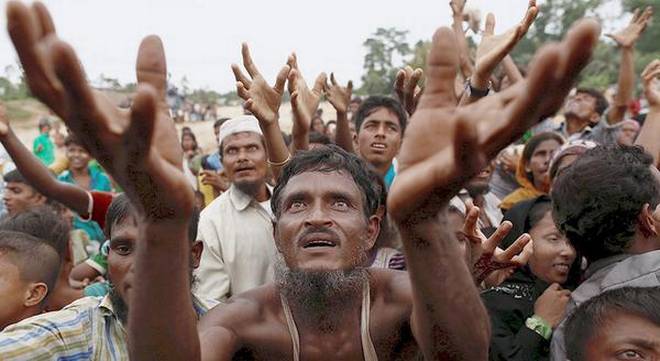 The Disasters Emergency Committee (DEC) has launched a UK charity appeal to help hundreds of thousands of people fleeing violence in Myanmar.

The government has said it would match the first £3m donated by the public.

Over 500,000 Rohingya people, the majority of whom are Muslim, have fled violence in Myanmar, otherwise known as Burma, with the actions of the Myanmar security forces being called by some, including the United Nations, as amounting to ethnic cleansing.

Many of the refugees have crossed the border into Bangladesh, staying in makeshift camps.

Chief executive of the DEC, Saleh Saeed, said the exodus was a “catastrophe” and left many in need of shelter and medicine.

Priti Patel, International Development Secretary said she was “appalled” by the violence in Myanmar and insisted the government would do “everything it possibly can” to help.

“It is utterly intolerable that the military who are responsible for this inhumane catastrophe have not heeded calls for restraint,” she said.

The violence in the nation’s Rakhine state started on 25th August after insurgents attacked police posts. The government and military have defended their actions since, claiming they have only acted in response to terrorism, though human rights groups and eyewitness accounts have argued that the response has been wildly disproportionate.

According to the United Nations, more than 410,000 Rohingya have fled to Bangladesh, many arriving with injuries sustained during the crackdown.

Member charities of the DEC are already in Bangladesh delivering emergency aid – but they said they needed more funding to reach people in need.

“Families are living in makeshift shelters or by the side of the road with no clean drinking water, toilets or washing facilities,” he said.

“This humanitarian catastrophe is unfolding in a country that is already reeling from the worst floods in decades.”

The DEC, which represents 13 UK charities, will broadcast its campaign video on major UK television stations.