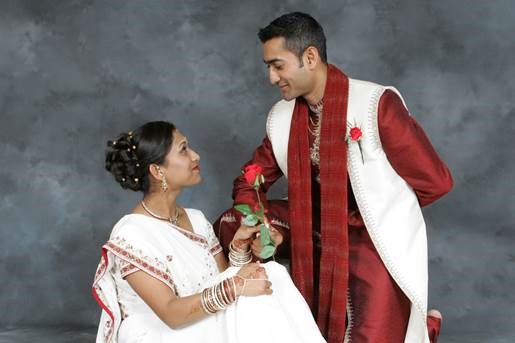 An optometrist from Bedford is raising awareness and funds for blood cancer charity Anthony Nolan in memory of her husband, who died after developing a rare blood disorder.

Poonam Shah, 38, is organising a series of fundraising challenges in memory of Rakesh Shah, who would have turned 40 years old this November. Poonam’s challenge will be to climb Mt Kilimanjaro in September – something her and Rakesh had always dreamed of doing together

Poonam is also encouraging people from south Asian backgrounds to join the Anthony Nolan stem cell register, after Rakesh struggled to find a suitable donor due to his Indian heritage.

Sadly, despite having a stem cell transplant from an unrelated donor, Rakesh’s condition was so advanced that he died in December 2014.

Poonam and Rakesh at their wedding 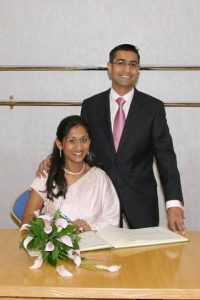 Poonam said: ‘Raks was honestly the most truly amazing, smiliest, sociable person that you’d ever meet in your whole life. Every room would light up when he entered. He was always the life and soul of the party and for him, family and friends always came first.

Poonam and Rakesh lived in Bedford with their two children, where they ran an opticians practice together. They first met during freshers’ week at the University of Manchester in August 1997. 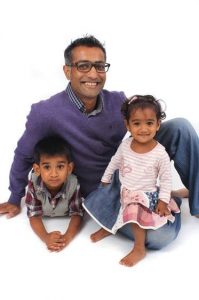 Poonam and Rakesh married in 2005 and had two children; Aaran, seven, who Poonam describes as ‘laid back, sensitive and amazingly well-behaved for a boy’; and Maya, five, who is ‘so fun and full of life – really cheeky, confident and funny’.

In 2012, Rakesh was diagnosed with MDS and told that he would need to have a stem cell transplant from someone with the same tissue type as him to replace his faulty bone marrow with healthy donor cells.

Both his brother and sister were tested, but neither were a match for him. Anthony Nolan then searched its register and others worldwide to see if a perfect match was available – someone with 10 matching genes that would help ensure that Rakesh’s body would accept the donor’s cells.

Rakesh had just one 10/10 tissue type match – a female donor from the USA. Unfortunately, she wasn’t able to donate. Anthony Nolan then found two 8/10 matches, one from Germany and another from South Africa.

Poonam said: ‘The donor from South Africa – a 37-year-old female – was willing to donate. She was only an 8/10 match, which we knew wasn’t ideal.’

Currently, donors from black, Asian and minority ethnic backgrounds (BAME) make up just 15% of the register, and BAME patients have only a 20.5% chance of finding the best possible donor match, compared to 69% for white northern Europeans.

The long wait to find a donor, and the lack of a perfect match, meant that Rakesh’s condition continued to develop and quickly worsened. He suffered from various infections which further delayed his transplant, which he finally received in August 2014 – almost a year after the search had first begun.

His first transplant was unsuccessful, so Rakesh received a second transplant in November 2014 from the same donor. Sadly, Rakesh’s condition failed to improve and he died on 20 December 2014.

Now, Poonam is passionate about encouraging people from south Asian and other ethnic minority backgrounds to join the stem cell register.

She said: ‘I want to raise awareness of stem cell donation among people from ethnic minority backgrounds because no person should be faced with the prospect of being told that they have no match on the register.

To mark what would have been Rakesh’s 40th birthday on 16 November, Poonam has enlisted the help of friends and family to undertake 40 fundraising challenges by his 40th birthday.

Poonam’s challenge will be to climb Mt Kilimanjaro on 22 September – something her and Rakesh had always dreamt of doing together. 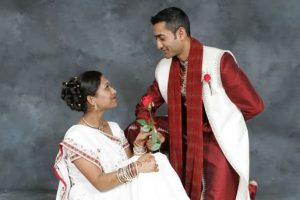 She said: ‘Climbing Mt Kilimanjaro on my own is a big step, and it’s also about me taking the next step in my grieving process. It’s going to be a hugely emotionally and physically exhausting experience.’

Over £7,500 has already been raised, with friends and family members pledging to do their own challenge in Rakesh’s memory in time for his 40th birthday. Poonam is hoping to raise £40,000 by Rakesh’s 40th birthday.

Henny Braund, Chief Executive of Anthony Nolan, said: ‘Poonam’s heart-breaking story is a stark reminder of how much more work needs to be done to reduce inequality on the stem cell register.

‘While it is encouraging that we’ve seen an increase in the number of people from black, Asian and minority ethnic backgrounds signing up as potential stem cell donors in recent years, it still remains the case that people from ethnic minority backgrounds face a disparity in their relative chances of finding a lifesaving donor.

‘We’re incredibly grateful to Poonam for everything she is doing to raise money and awareness for Anthony Nolan. Her amazing efforts will leave a lifesaving legacy in Rakesh’s memory.’

People aged 16-30 and in good health can join the Anthony Nolan stem cell register. It costs £60 to add each new donor to the register, so Anthony Nolan relies on financial support.