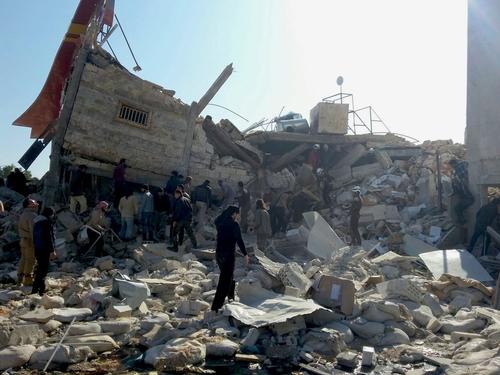 A Medicine Sans Frontieres (MSF) supported hospital has been destroyed, killing atleast seven people. The medical charity has posted pictures of the destroyed hospital online, which was destroyed in the attack on Monday 15th Febraury.

Four missiles hit the hospital within a few minutes of each other, according to staff from the hospital. Other buildings and house were also struck in the area. The hospital was situated in the Idlib province in northern Syria.

Massimiliano Rebaudengo, MSF’s Head of Mission said “The destruction on the MSF supported facility appears to be a deliberate attack on a health structure.

“The destruction of this hospital deprives about 40,000 people of healthcare in this conflict zone.”

A caretaker, five patients and a hospital guard were killed. In addition eight members of the hospital staff are missing, presumed dead. The numbers of dead may increase as people are still missing.

“We have beem moving scores of screaming children from the hospital.” Said medic Juma Rahal.

The MSF has blamed the attack on Russia or Syrian government forces.

Mr Rebaudengo also said: “The destruction of the hospital leaves the local population of around 40,000 people without access to medical services in an active zone of conflict”

There were also reports on Monday morning of another two hospitals in Azaz city being attacked. These facilities were not supported by MSF.

In December 2015 the hospital was re-built in a new location as it previously had been attacked three times. The MSF supported the reconstruction.