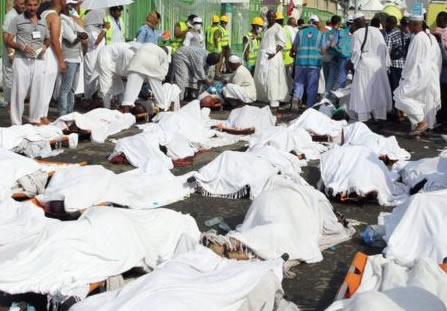 The Foreign and Commonwealth Office (FCO) has said it is urgently seeking information on whether any British nationals were caught up in the fatal stampede that killed over 700 people during the annual Hajj pilgrimage.
According to the Council of British Hajjis, around 20,000 British nationals are taking the journey to Saudi Arabia. The country’s monarchy, Kind Salman has ordered a review in to the incident, saying there was a need “to improve the level of organisation and management of movement” of pilgrims.
Foreign Secretary, Phillip Hammond, expressed his condolences to the families and said the government was urgently trying to gather information. “I was saddened to hear of the enormous loss of life in Mecca. My thoughts are with families and victims at this difficult time. Such a significant tragedy will affect Muslims across the world who take part in the Hajj pilgrimage. Our staff remain in close contact with the Saudi authorities and tour operators, and are checking hospitals and other locations to urgently gather information about British nationals who may require assistance. We are also deploying further staff from the region to bolster our response.”
The crush occurred after two massive lines of pilgrims converged on each other from different direction at an intersection close to the five-storey Jamarat Bridge in Mina. The current confirmed deaths are:
Just two weeks ago, a giant crane crashed down on the Grand Mosque in Mecca, killing 111 people and injuring more than 390.
The temperature in Mina was 46C.
The FCO says worried relatives should call the British Embassy in Saudi Arabia on + 966 11 4819 100 or contact the FCO via Twitter @FCOtravel