On her cinematic debut in Hero, the official remake of Subash Ghai’s film 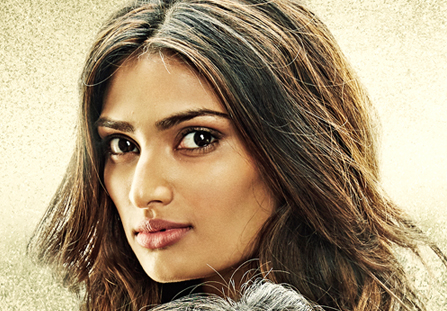 Athiya Shetty daughter of Bollywood star Sunil Shetty, is all set to make her cinematic debut with Hero on 11th September. The film is produced by Salman Khan and also stars Sooraj Pancholi. Hero is the official remake of Subash Ghai’s romantic action flick of the same name starring Jackie Shroff.

How are you feeling now that your first film is about to seen by audiences in the UK and worldwide?
I am really excited but also nervous at the same time. There are a lot of butterflies in my stomach as the date is nearing closer and closer.

The film is an official remake of Subhash Ghai’s film of the same name and Salman Khan is producing it. How did come to you?
I have always wanted to a be an actor since I was a child. I have always been a creative child as I loved theatre, dancing and performing on stage. I have always been inclined to this world. I decided to go to film school after I finished my 12th grade. I attended a course in film-making which included direction, acting, editing, casting and everything else related to it. I came back to Mumbai and it just happened that Salman Khan saw me at the gym. He spoke to my father and the next thing I knew was that I was on the sets of Hero.


Not many actors who come from film families have an education in film-making. Do you think you have an advantage over someone who hasn’t learnt the craft formally?

I don’t think you have to go to film school to get that education and the understanding of the industry. A lot of star kids have been on sets and have worked as assistant directors. They have been there and learnt on the job. I can’t say that I got an education just because I went to film school. I think you can get an education is many various ways instead of going to an institute. I did learn a lot but also about myself. I was living alone in New York and I became a lot more independent. I understood myself and learnt to be alone which is really important for an actor. My education was not just about films but also about understanding who I am as a person.


The industry has changed a lot and audiences have become unpredictable. Do you worry about what will happen if this film doesn’t work out for you?

Of course. I think for any newcomer the most important thing is acceptance. I am just waiting for 11th September to see if the film is accepted and whether the audience likes to see me on-screen. But I think that if I am accepted, that is great. But if I am not, I will work even harder. You have to be prepared for both, success and failures.


How different is the remake from Subhash Ghai’s Hero?

During the Jiah Khan suicide incident, the film got a lot of flak and social media was buzzing with people calling for a ban for the film because of Sooraj Pancholi. How did you feel at that time and how is it now that the film is being accepted?

I didn’t feel any different at that time as I was very confident about the project and the people who were associated with it. I am not a judgemental person and had complete faith in Sooraj. He is a great actor and constantly helping others and then thinks about himself. He is also very hard working and professional. When he comes on set, there is no extra baggage that he carries along with him. People have asked me this question but honestly, I never had any negativity towards the film.

Salman Khan has lent his voice to the title track of Hero. How does that feel?

I feel extremely blessed. I get very excited every time it gets played on radio or TV. It is extremely emotional for both, me and Sooraj.

What is the best advice you have received from someone in the film fraternity?

I think it would be from both, my father Suniel Shetty and Salman Khan. They both told me to always be humble and never forget the people who brought you to this platform. They taught me how to conduct myself in the industry.


Actors do change once they get stardom. How do you plan to stay grounded?

Change is the only constant. Of course, we will change. Everybody grows and evolves. I am not worried about changing in terms of morals. I know my parents will always be there for me in case I steer away.