Producer Teams up with Jazzy B and Gippy Grewal for Etwaa 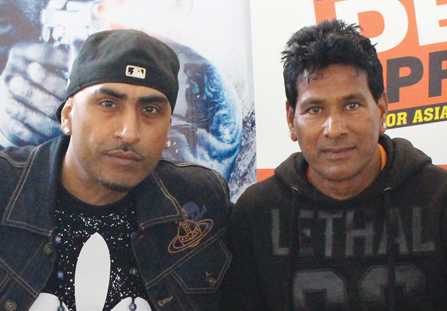 Music producer, Dr Zeus was recently in his hometown of Birmingham, promoting his latest single Etwaar. Featuring the vocals of Jazzy B and Fateh Doe, the song will be used in Gippy Grewal’s new movie, Faraar. He spoke to Surj Kumar of DesiXpress about singing, the movie and collaborating.


How did the track come about?


I’ve been working closely with Gippy for a few years now, he is a dear friend who is like an older brother to me. He’s always sending me his vocals. He sent me Etwaar – which were in Jazzy’s vocals and told me there was a bit of an urgency to it because it was for the movie. Jazzy’s vocals are always inspiring because he adds his own character to it. The song is very meaningful and sends a message.


What do you think of the movie?


Gippy has worked really hard on this movie. I’ve been with him whilst he has been rehearsing for the film. He’s also been working at the gym really hard. His acting skills are great. For him it was just a challenge to put himself in that kind of role. We definitely have something to look forward to.


You currently have another number one hit with Sharmilla called Chamkila Kharku – how did that collaboration happen?


I’ve with Sharmilla before, but I haven’t done something with him for a while, a good four years. This time was the right time to produce it. We are both fans of Chamkila and I honestly believe that, in my eyes, he is still alive. Everybody is living off his work at the moment.


Sharmilla, what was different to the original?


Everything I did I did on the advice of Dr Zeus! We put a little twist and created a tribute track to Chamkilla. We are grateful to everyone that has brought this song.