Talks about encouraging males to pursue their cooking dreams 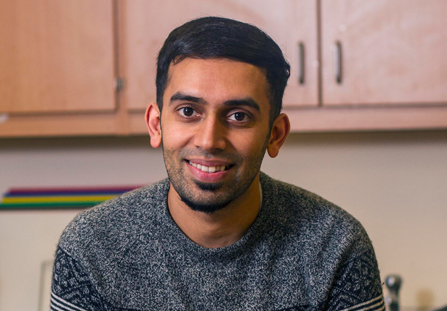 What got you into cooking?


I went to university and I wasn’t the table type of person, I really was a donner kebab kind of person. The house that we used whilst at university, the person that used to live there before, they left a cookbook behind. So me and my flatmate just went through the book and started cooking. From there we started baking. We found we actually started to enjoy it. After university, it became a hobby. That’s when I applied for Bake Off.

How did you find that process?


Very difficult. People that apply to Bake Off, don’t apply to be famous. So the cameras kind of take you by surprise. You’re filming for 16 hours straight, so that first day was particularly hard. In hindsight, I think I would do better now because I am a lot more sure of myself.


There are two Asian contestants on the show – you were the first male. Did you find it difficult for that reason?


I think the reason I was on there was because I was an Asian male because when I was at audition stage I could tell that there were people that were far better than me. I think they were intrigued at the concept that I was an Asian male – that’s fine because I do represent a whole community. Once the programme started to air, the feedback I got was different. Firstly it was negative – lets be honest, there are pockets of our community that are still backwards. But then, as the weeks went on, people started to come around – that’s when the positive comments came through. But overall, going on Bake Off has opened up so many opportunities.

How did Artisan come about?


The people that owned the place – they contacted me and said ‘we want to open up a dessert parlour and we would like you to get involved.’ Initially, I wasn’t really interested because there are so many already out there – but they ended up convincing me. It does work – every weekend we have a queue outside – so it’s going really well. After this, I am opening a restaurant – it’s based on American diners but with eastern flavours.

There are two Asian contestants on the show – What tips would you give them?


I do speak to Nadia and Tamal. Nadia loves the whole process. Tamal’s got his exams going on so he is locked away at the moment. He is extremely talented though, I honestly think he will make it to the final.

How would you encourage others to pursue their baking dreams?


I do try and encourage male’s to pursue their cooking dreams because I really want people to get into baking, not just as a hobby – but as a career choice. I hold workshops where people are trying to turn their hobby into a business and how they can do that. The baking industry is phenomenal with the margins or profit being so high, you just have to make sure you play it right. It is a skill – its something you are born with you should use it.