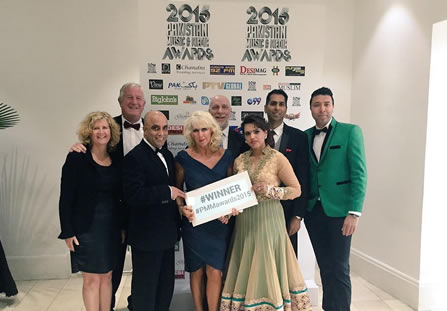 The Asian Today added another award to its mantelpiece when it was named as the Best Newspaper at the 2015 Pakistani Music and Media Awards. Hosted by the BBC’s Saima Ajram and Lyca Radio’s Ruby Raza, the event was created to recognise the outstanding contribution to both the Media and Entertainment Industry and celebrate grassroots initiatives by individuals and groups across the UK with Pakistani and British Asian heritage.
Editor, Anita Chumber, said they were delighted. “This is our 4th award in the space of two years and we are always overwhelmed by the support we receive from our readers. I also want to take this opportunity to thank everyone who voted for us, it really does mean a lot to the whole team.”
Winners included:-