Home Uncategorised He Named Me Malala 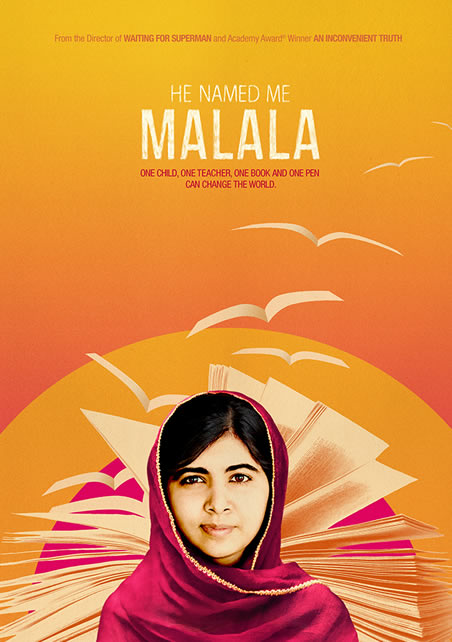 A new documentary movie, depicting the incredible journey of Malala Yousafzai will be given a UK release later this year. The documentary is an intimate portrait of the 16-year-old’s life, who was wounded when Taliban gunmen opened fire on her and her friends’ school bus in Pakistan’s Swat Valley.
The then 15-year-old teenager, who had been targeted for speaking out on behalf of girls’ education in her region of Swat Valley in Pakistan, was shot in the head, sparking international media outrage. An educational activist in Pakistan, Yousafzai has since emerged as a leading campaigner for the rights of children worldwide and in December 2014, became the youngest-ever Nobel Peace Prize Laureate.
“Malala’s incredible journey is both heartbreaking and inspiring.  Her bravery in the face of adversity brought us to tears.  The chance to bring her story to a global audience will be an honor for all of us here at Searchlight,” said Fox Searchlight execs Steve Gilula and Nancy Utley.
In a call to millions of other girls around the world and those who stand with them, the film will also launch an international advocacy and fundraising campaign in partnership with the Malala Fund, Malala’s nonprofit organization working to empower adolescent girls globally through a quality secondary education.
The deal was brokered by Fox Searchlight’s Executive Vice President of Worldwide Acquisitions, Tony Safford; Senior Vice President of Business Affairs, Megan O’Brien; and Senior Vice President of Acquisitions & Co-Productions Ray Strache, and Julian Zajfen at Ziffren Brittenham, which represented the filmmakers.
The film’s producers are Walter Parkes and Laurie MacDonald. Executive producers include Mohamed Al Mubarak and Michael Garin from Image Nation Abu Dhabi and Jeff Skoll for Participant Media.
Fox Searchlight Pictures acquired worldwide to the documentary with Studiocanal will distribute the film in France. He Named Me Malala is scheduled to be released on November 5 2015 in the UK.