Little Muhammad Ali has become West Midlands Police’s youngest hero after receiving an award from the force for bravery. 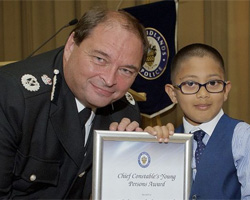 The seven-year-old showed immense courage when he stood up to armed robbers who raided his Birmingham home.

On October 2 of last year, the Balsall Heath youngster was awoken suddenly in the middle of the night by the sound of the front door being kicked open.

When he went downstairs to investigate the noise, the scene which greeted him was one in which his mother was being harassed by seven masked men demanding the family’s Asian gold jewellery.

One of the raiders snatched up his baby brother, threatening to hurt the child if his mother didn’t comply with their demands.

Upon seeing this, Brave Muhammad ran to his mum’s side, shouting at the men to leave her alone – an action which detectives believe left the attackers stunned enough to flee the scene empty-handed.

Chief Insp Phil Radbourne said: “It must have been scary but Muhammed’s first instinct was to run towards the men and to protect his mum – his actions were extremely brave and undoubtedly left the burglars stunned.

“Moments later they left empty-handed and Muhammed, his mum and his baby brother all escaped unhurt, though they were understandably very shaken by the ordeal.

“I’m delighted we’ve recognised Muhammed’s bravery with a Chief Constable’s Young Persons Award; he can be rightly proud of himself.”