18-Year-Old Racially Abused And Attacked Outside A Coventry Mosque

Police in Coventry have launched an investigation into the assault on an 18-year-old which took place at 1am in Eagle Street, Foleshill.

The teenager, who wished to remain anonymous, was left with a black eye from the attack but did not sustain any serious injuries.

His father, Qudir Hussain, of Foleshill, has said he is certain the attack was racially-motivated.

The attackers are believed to have targeted the nearby Masjid-e-Zeenat-ul Islam mosque, in Stoney Stanton Road, and thrown stones at the windows before launching the attack on the teenager. 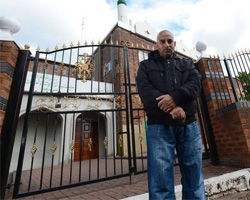 “I’m really angry,” Qudir said. “They went from one place to the other, they were clearly looking for trouble.

“Apparently they were throwing things at the windows and shouting out racist abuse.

“My son has a black eye. I did tell him to be careful and that he maybe shouldn’t go out.”

The teenager, who had been offering his evening prayers at the Jamia Mosque, left the mosque at around 12.30am a short while before the attack took place.

He was approached by four men and two women, some of whom are believed to have been in a dark coloured Toyota car, who swore at him before attacking him from behind.

Qudir, 45, said: “They threatened him. They said they will cut him up, chop him into little bits.

“He wasn’t looking for trouble, it came to him.

“I just want everyone to be aware that this sort of thing is going on.”