A Birmingham based 5-year-old boy has become the youngest-ever certified Microsoft Computer Specialist. Ayan Qureshi took the exam at the age of five and overtook Pakistani Mehroz Yawar for the coveted title. Speaking to The Asian Today, he described how he felt.

“I developed an interest in computers in very early age. I used to sit next to my dad, watching him working on computers and hi-tech stuff. That was the turning point. It was the time I started playing with computers. As the time passed my interest in computers grew and it became hobby for me to play around with computers, there was more and more interest and fun for me in the computing while I was learning and grasping the concepts. My dad spotted this potential and talent and decided to channelise it. So, we decided that we should set up a new world record, that’s how it started.” 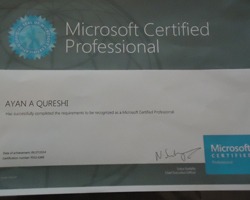 “I passed the standard examination procedure at the prometric centre in Birmingham City University. It took me many months to prepare for the exam and certification,”

“I studied Microsoft books, set up my own home IT lab comprising of computers, laptops, routers, switches, firewall, cables, connectors, interfaces, cable tester and relevant tools. I was installing and configuring operating system on the computers and laptops in the lab. I interconnected computers, I was so excited when I set up my first computer network in the lab especially when I saw that these devices were pinging with each other and data was being transferred from one device to another.”

“I used to practise and study in my lab every day for one to two hours. It took many months to prepare for the certification. In the beginning it was a bit difficult but I still enjoyed it. I got Microsoft books and training material from the London based IT training company (ITBOLTS), the teacher was very cooperative. The IT company, I used, gave me a lot of technical advice.”

“My parents always support and encourage me, my dad played a major role in helping me to build up my own home computer lab, where I practiced and studied for the exam.” 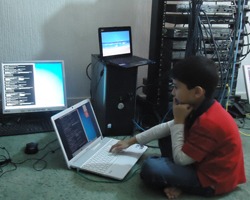 When asked whether it would have had a negative effect on him, given his age, his father, Asim, brushed the comments off. “Supervision, guidance, training and parental control is very important, while the kids are playing with computers on their own. There is always a potential situation where kids can have negative effect as well. If all the precaution and security measurements are taken into account there are very less chances.”

Ayan might not be fully aware what he has achieved, but his remarkable achievements is testament to the very fact that the next generation of the Asian community are being brought up with their ancestors grit.

Ayan has a bright future ahead of him, choices and many avenues are open for him. His father’s optimism for him comes in the form of his son’s already established future. “He has a couple of ideas and projects in his mind, if he managed to cash them at the right time he will earn his fortune.”