Mother and son find knife inside naan bread from take-away

A Birmingham mum was horrified to find a knife folded into the naan bread she had bought as part of her take-away order. 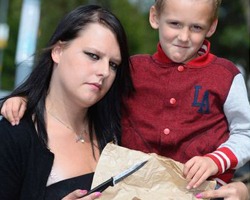 Kayleigh Walker, 33, and her five-year-old son Dane found the 20cm-long blade tucked away into the folded naan which they had ordered from Star Tandoori, in Ladywood.
It was the first time the family had bought a meal from the take-away, which they had found on Just Eat.
Enticed by the reasonable prices and good reviews Star Tandoori had received, Kayleigh and her son had chosen to order a kebab, a meat korma, fried rice, a Hawaiian pizza, cheese naan and two portions of cheesecake.
Kayleigh, from Bartley Green, said about the incident: “My son could have easily reached over and grabbed the naan.
“He was eating his pizza, I opened the naan and went to rip it in half to share it out when I found the knife.
“I couldn’t believe what I was actually seeing. The blade was about 20cms.
“I actually touched the blade itself to see how sharp it was. It seems like it’s been recently sharpened.
“Had Dane touched that I dread to think what could have happened. I said this to the guy who was the manager but he just didn’t seem to understand.
“What if they had left this in somebody else’s food? Luckily for me my son’s quite smart, he knows if he sees a knife he doesn’t touch it.
“My mum said ‘What if he’d picked that up and bit straight into it without unwrapping it?’
“How could they have left it? Out of all the things you can find in a takeaway you wouldn’t expect that.” 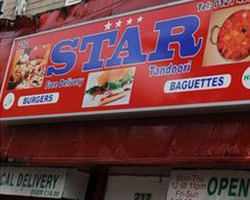 After the incident Kayleigh complained to the restaurant and though the restaurant manager apologised for the mistake, they refused to refund her for her purchases, the bill of which had come to £17.80 after a 20 percent discount.
The restaurant had instead offered Kayleigh a free meal, which Kayleigh was unwilling to accept as she did not want to order from the restaurant again.
She said: “It’s the first time trying out the place – and definitely the last.
“The manager just said ‘Next time you order from the restaurant you can have anything off the menu for free’. I said ‘I’m not going to be ordering from there again’.
The manager has since visited Kayleigh to collect the knife and has assured the mum-of-one that the employee responsible for the incident has since been fired from his position.