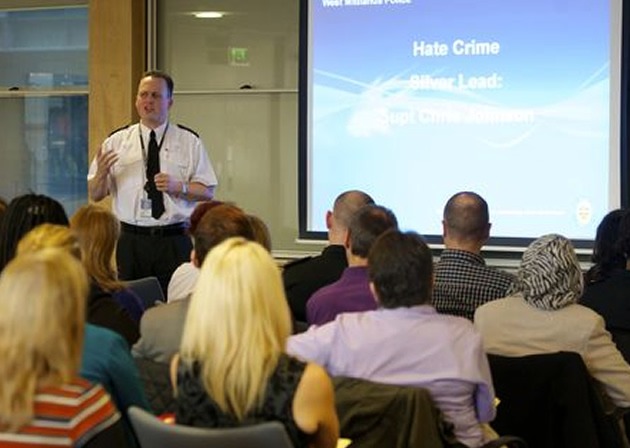 West Midlands Police hosted a force first with members of the public coming together to pledge their commitment to tackling hate crimes.
Around 80 delegates representing faith groups, disability rights campaigners and others attended the meeting held at police headquarters in Birmingham on Friday (10 January).
The event was the first time that representatives from the 100 third-party hate crime reporting centres in the region had been called together with the creation of a new networking forum.
The centres provide people who have been targeted because of their race, religion, sexual orientation, gender identity or impairment with an alternative to reporting incidents directly to the police.
The day was part of West Midlands Police’s ongoing commitment to increase the number of people reporting crimes.
Superintendent Chris Johnson, the force lead for tackling hate crime, said: “West Midlands Police is totally committed to targeting criminals who single out victims just because of who they are.
“Historically such crimes have been under reported for a variety of reasons including a lack of confidence in the police’s ability to bring offenders to justice.
“There has been a lot of work undertaken by the force to change this and we are beginning to see an increase in the number of cases we investigate.
“I don’t believe this increase is because more crimes are being committed but rather more people know that they will be taken seriously, treated with dignity and respect and that their case will be thoroughly investigated.
“An important change has also been raising officers’ awareness of hate crime and developing their appreciation of the devastating impact incidents have on victims.”
But Supt. Johnson is keen to stress the increase in reported incidents is not just due to the work police are doing, but the commitment of other people.
“The large network of third-party reporting centres the force has created over the years has also helped increase the number of people coming forward,” he said.
“Staff at these centres are ambassadors for victims and justice. The fact they are in places where victims would ordinarily go – such as places of worship or day centres – and that they often have an existing relationship with the victim goes a long way.
“They are able to recognise when something is not right and can gently encourage people to go directly to the police or alternatively disclose details to them so that they can report the crime on their behalf.”
More focus on hate crime, coupled with better recording and reporting practice, feature in the Police and Crime Commissioner’s Police and Crime Plan, which sets the strategic objectives for West Midlands Police. Improved hate crime recording was announced at a recent meeting of the Strategic Policing and Crime Board.
West Midlands Police and Crime Commissioner Bob Jones, said: “My Police and Crime Plan calls for there to be fuller recording of hate crime, particularly where it is motivated by religious hatred. Anything we can do to make people more confident to come forward and report hate crime is to be supported. It was encouraging to see so many people committed to supporting the force and safeguarding victims.”
The aim of the event was to provide those volunteering as hate crime recorders with refresher training and an opportunity to get together and share experiences to improve their service to victims.
Staff at third-party reporting centres receive free special training from the police on current legislation, the definition of hate crimes and how to take crime reports via a dedicated website.
For more information on hate crime – including how to report offences – visit: www.report-it.org.uk
Between April and December 2013 2,267 hate crimes were investigated by police across the West Midlands. This is up by 1,882 offences compared with the same period the year before.