Vigil was held in Birmingham 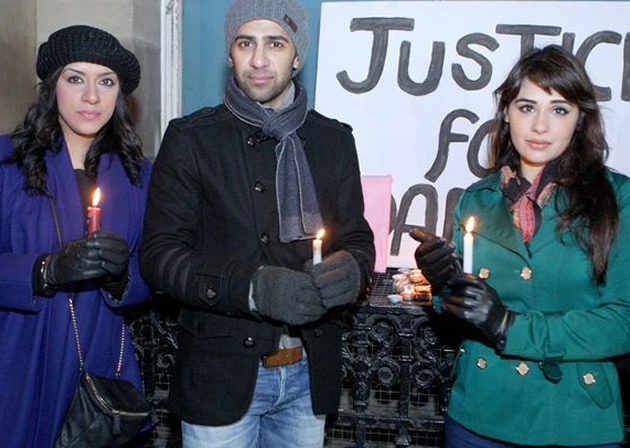 An award winning media professional from Wolverhampton, in the UK who launched a campaign raising awareness on issues of rape and abuse in India held a vigil in Bham in memory of the Delhi Gang Rape victim, ‘Damini’ on the 1st anniversary of her death. The vigil attracted over 100 people who came to pay their respects and show their support.
Supporters gathered in extremely cold temperatures and took time out of their festive holidays to join the vigil.
Reena Combo, an entertainment editor, decided to convene a campaign calling for justice following a horrific assault on a female bus passenger in the Indian city of Delhi on December 16th in 2012, which has drawn international outrage.
Reena has since been campaigning for many women and young girls to raise awareness on issues of rape and abuse all over India.
An earlier vigil which attracted over 250 people making both National and International news was arranged in January 2013 in memory of the young woman. Reena took it on herself once again to hold another event, one year on to keep the fight for justice going.
The passenger, a 23-year-old medical student – who has been dubbed ‘Damini’, was set upon by a gang of six intoxicated men, including a joy riding bus driver. She was then raped repeatedly for over an hour and received serious internal injuries after being sexually abused by a metal rod.
Following the attack on the passenger and her male friend, rallies were staged across the world calling for those in charge to take responsibility. Protests have highlighted gender attitudes in India, and called for changes to laws on rape and violence against women.
In the Midlands, local activist Reena Combo has taken it on herself to raise as much awareness as possible for many ‘Damini’s out there. Having been inspired by the Delhi Gang Rape victim and realising the need for awareness and support she is now also in the process of setting up an organisation called ‘Damini’.
‘My life has taken on a new role. I am truly dedicated to raising awareness on issues of rape and abuse in India, and setting up a support a network in the UK to help many Asian women who suffer in silence in the UK too. The vigil on the 29th December was held on the day ‘Damini’ passed away to honour and remember her. She may not be here anymore but she can be a silent voice for so many other oppressed women in India and other countries.”
The event was attended by a number of interfaith leaders, media figures, local Asian celebrities and speakers, including Councillor Narinder Kaur Kooner, Bhangra legend Balwinder Safri, Artists and musicians Foji Gill and Simon Nandhra and International actress Mandy Takhar.
The vigil in Birmingham was a beautiful evening, where candles were lit and ‘Damini’ was remember during a 1 minute silence in her name.
“I’m so pleased with the support the campaign work has been receiving. My mission is to keep raising awareness on the issues of rape and abuse against women in India, but also set up an organisation and a support network here in the UK.”
Reena’s fight for justice and raising awareness has been recognised nationally as she was awarded Media Professional of the Year in October this year at the Asian Media Awards in the UK.
Watch the video link of the vigil that was held by Reena Combo, that took place in Victoria Square, Birmingham on 29th December 2013.
LINK: youtu.be/xs2kXx6GKXs