Bilal Ahmad came up with the idea 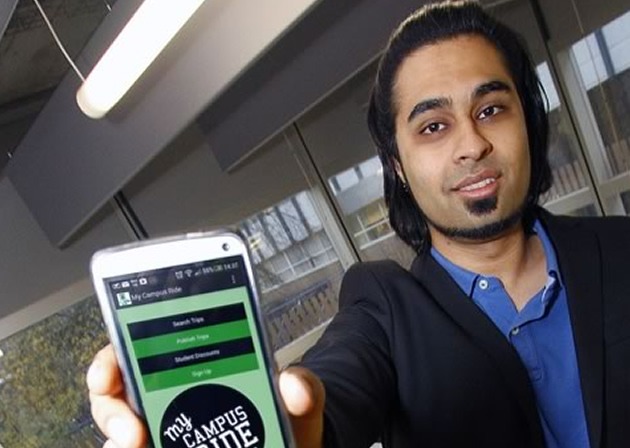 A Coventry University graduate has launched a free car-sharing app to help students get from A to B without breaking the bank – and it’s already generating interest from universities around the country.
Bilal Ahmad, a double graduate who completed a BSc in Engineering Management and a Master’s degree in Information Technology, came up with the idea after deciding that there weren’t enough student-focused apps available.
The ‘My Campus Ride’ app – which he and his business partner Hari Boya created with backing from the University’s Institute for Applied Entrepreneurship (IAE) – invites students to register the journeys they want to make, before matching them up with fellow students doing the same trip in their own car.
Canadian-born Bilal’s app is already causing a stir amongst UK universities, with several – including Lancaster and Plymouth – in discussions to adopt the app for their students.
Users of the app will be able to mark down people who drive erratically or have messy cars through an in-built rating system, and only those with a university email address can register – no names or mobile numbers are used to ensure safety and security.
The app also taps in to the student union’s activities schedule to act as an events guide, and – through exclusive link-ups with local shops and restaurants – offers students discounts at retailers in the city centre.
To make his vision for the app a reality, 29 year-old Bilal secured a grant from the IAE – which provides mentorship and funding to enterprising Coventry students and graduates, plus a business address on the University’s Technology Park – before winning further support through the European Regional Development Fund-backed SPEED Plus initiative.
Bilal, who lives in Birmingham and hails from Cambridge, Ontario, said: “The level of interest we’ve had so far has been fantastic. Students are interested for the service and discounts our app offers, but universities are also keen to get involved because the car-sharing aspect aligns well to their sustainability agendas. It’s a win-win situation for everyone.  We were promoting the app in the Hub at Coventry University last week and we had over 600 people show interest in a short period. It’s currently available for Android systems while we work on the Apple version, but loads of students with iPhones were asking us to let them know as soon as it’s the App Store.”
Stephanie Monk from Coventry University’s Green@CU sustainability initiative, which has backed Bilal’s app from its early stages, said: W”e’re 100 per cent behind what Bilal is doing and are supporting him in getting word out about his app wherever and whenever we can. Car-sharing initiatives have had some success at the University before, but adapting the concept to newer tech platforms like apps gives it a lot more potential which in the long term could boost its positive impact on the environment.”
The My Campus Ride app is currently available in the Google Play store for Coventry University students; plans to roll it out to Apple’s App Store and to all UK university students are in development. For more information visit www.mycampusride.com.