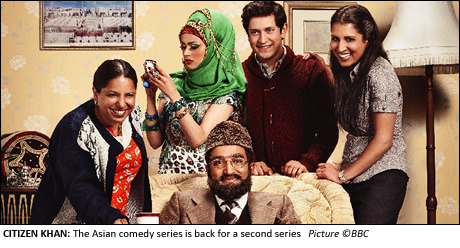 HE may not have been everyone’s cup of tea, but community leader-come doting father Mr Khan is back on our TV screens for a second series!
We caught up with actresses Maya Sondhi and Bhavna Limbachia, who play daughters Shazia and Alia in the show to get a lowdown on the new series…
Ladies, we’re back for a second series of Citizen Khan. How are you feeling ahead of its return?
Bhavna: Very excited! We can’t wait for everyone to watch the new series!
Maya: I think we have a much stronger series this time round so excited but nervous too of course!
When you were cast for Citizen Khan, did you think the show would generate so much debate?
Bhavna: With being the first Asian Sitcom we knew it would gage a lot of interest. This has paid off as we’re really chuffed to be back for a second series.
Maya: Not at all.  It was just an exciting job to be involved in.
Were you surprised at the negative and positive reaction it received?
Bhavna: The positive reactions outweighed the negative ones, so we were all very pleased with the outcome and viewing figures for the show.
Maya: Not really.  Comedy is subjective. You are always going to both please and annoy people.  Not everyone has the same taste, after all, how boring would that be?!
Did you do any research into your characters?
Bhavna: I spent time in Birmingham to work on the accent as I’m originally from Lancashire. I also went around shops on Ladypool Road in Sparkhill to get a feel for Alia’s character.
Maya: I am a Brummy Asian so my life experience of various characters has been my research!
What can we expect from your characters in the second series?
Bhavna: Lots more mischief and pulling the wool over her Papji’s eyes!
Maya: All the characters are much more defined and Amjad and Shazia, in particular, are much more grown up.
Maya, tell us…does Shazia finally get married to Amjad in the second series?
You’ll have to wait and see!
Bhavna, we saw your character Alia glued to her phone in the first series – does the phone make its return this series?
Haha, definitely! Her phone is an extension of her arm. She wouldn’t be able to function without it!
You film on location and in front of a studio audience – how’s that experience for you?
Bhavna: Having the best of both worlds for my TV debut has been fantastic and I have to say I have loved every minute of it. Also filming in front of a live audience you get a huge adrenaline rush from the energy of the audience’s laughter, which makes the job a whole lot easier.
Maya: It’s SO much fun!  The perfect balance between theatre and telly!
How fun is it to work on Citizen Khan?
Maya: Very!
Bhavna: It’s so much fun! From the moment you read the script, right through to the live shows you’re constantly in fits of laughter. Plus working with such a great cast and crew is a bonus!
What’s it like to work with Adil?
Bhavna: Adil is an incredibly passionate and focused person so working with him makes you up your game. However, once he steps out of the Costume and Make up room with his fat suit and beard on- you just can’t take him seriously!
Maya: Hard work but a lot of fun!  It’s his baby so of course, it means a lot to him to get it exactly right.
Aside from Citizen Khan, what have you got lined up?
Maya: I am currently involved in workshops for the West End Musical version of Bend It Like Beckham, as well as writing my own scripts.
Bhavna: I’m working on a few projects at the moment which will be airing next year so watch this space!
Finally, ladies why should The Asian Today readers tune into the second series of Citizen Khan?
Bhavna: Because it’s funnier and wittier!! Haha
Maya: It’s a light-hearted family sitcom that everyone can enjoy…plus, it’s cheaper than going out to the pub on a Friday night innit?!
Citizen Khan, 9.30-10.00pm, BBC ONE