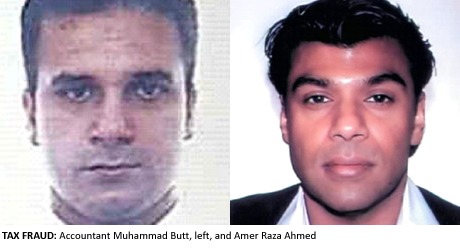 A CORRUPT chartered accountant from Birmingham has been jailed for defrauding the British taxpayer of over £1 million in unpaid VAT.
Muhammad Butt, owner of accountancy firm ABMG Business Services, was asked by HM Revenue and Customs (HMRC) to provide documents he held for two businesses that were under investigation. But despite receiving a court order in March 2010 he refused to hand over the paperwork.
The businesses, Chand Bridal by Khushboo and Kushboo by Chand, were owned by well-known Birmingham fashion designer and trader Amer Raza Ahmed who originally failed to tell HMRC about them.
Ahmed eventually declared the Chand Bridal by Khushboo element of his business but then, with his accountant Muhammad Butt, submitted VAT and tax returns that under-declared turnover and profits estimated to be in excess of £4 million.
Adrian Farley, Assistant Director of Criminal Investigation for HMRC, said: “Butt abused his position and profession. He continually failed to meet his legal responsibilities to provide information in a bid to cover up a serious crime, against the British taxpayer. His deceit has landed him behind bars and justice has been served.”
Butt was arrested in August 2010 and paperwork and computers were seized from his home and business premises.
He was jailed for three years at Birmingham Crown Court.
Ahmed was deemed unfit to stand trial but was found by a jury to have committed the act of not declaring the correct level of income for his businesses over a number of years.  He had also failed to pay substantial levels of income tax and VAT due to HMRC, believed to be in excess of £1 million.