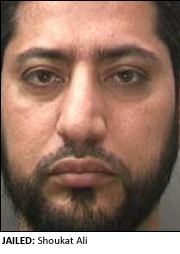 A MOTHER of five was stabbed to death by her estranged husband days after seeking a divorce.
Shaista Khatoon was attacked at her home in Alum Rock, Birmingham by her husband
Shoukat Ali on 19 November 2012.
He stabbed his wife several times before cutting her throat.
Ali, 38, was jailed for life at Birmingham Crown Court after admitting to murdering her.
Ali, who was estranged from his wife at the time of the murder, had been served divorce papers just a few days before.
Unable to accept the marriage was over, he broke into the home on Farndon Road and confronted her.
The victim dialled 999 to call for help, but Ali, armed with a knife stabbed her several times before cutting her throat. Emergency services arrived at the address within minutes but were unable to save Shaista due to the severity of her injuries.
Sergeant Ranj Sangha, from Force CID, said: “There are no winners, the children have lost a mother and have to live with the fact that their father is responsible.
“The relationship between Ali and Shaista had deteriorated over the later years, resulting in his behaviour becoming controlling and violent. We welcome the result and our thoughts remain with the family and loved ones at this time.”