Home Sports Daanyal Ahmed Spalding has Golf down to a ‘Tee’ 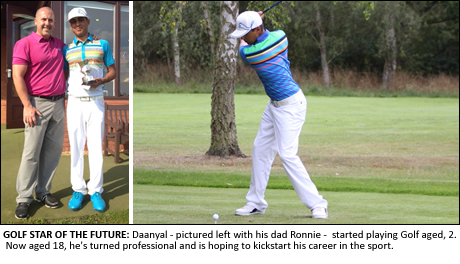 IN A sporting world where the likes of Rory McIIroy and Tiger Woods continue to scale the heights of Golf, one British Muslim from the Midlands is hoping to emulate their achievements.
Daanyal Ahmed Spalding from Birmingham is hoping to become the first professional British Muslim golfer to achieve the sporting greatness of Golf’s biggest stars.
The 18-year-old, who lives in the Hall Green area of the city with his family, turned professional last month and played in his first Pro-Golf tournament – the Jamega Golf Tour at Burnham and Berrow Golf Course.
When he stepped out onto the marvelous green Daanyal finally realised a dream he held as a youngster.
“Playing in my first Professional event had always been my dream since I was a young child,” Daanyal tells The Asian Today.
Whilst he admits he enjoyed playing football and cricket as a youngster, he found himself constantly drawn to Golf.
“I picked up my first plastic golf club when I was two and just fell in love with the game from that moment,” says Daanyal.
“I remember hitting plastic golf balls in the back garden with my dad.”
From the age of four Daanyal began perfecting his game with the help of his dad, Ronnie, who as a golf enthusiast himself realised the youngster’s potential from an early age.
Alongside his wife Ruby and young daughter Maariyah, Ronnie and the family fully supported Daanyal’s passion for the sport.
“Without my mum and dads support taking me all over the country to play in events and financially supporting me I wouldn’t be at the level I’m at now,” says Daanyal.
Currently studying for his A-Levels at Tudor Grange School, Solihull, Daanyal has also managed to combine his studies with golf.
“My school has always been supportive, and when I’ve played in tournaments where I have been out of school for a week or more they have set me work to do and this has helped me from falling behind in my studies.”
But having played in tournaments across the UK, America and even in Pakistan, Daanyal admits his foray into Golf hasn’t been plain sailing.
As a British Muslim, Daanyal knows he is in a minority and admits he has faced racism from other golfers.
“Being a Muslim you are definitely the minority amongst the masses in golf,” Daanyal says. “This becomes evident in team selection and also facing racism from other golfers. But I have always been determined that I would let my ability do the talking and having won the major county events when I was growing up , this made the powers at be have to select me.
“I would like to be an inspiration and example to all Asian children. If you want something bad enough that through hard work and determination you can achieve,” he adds.
For Daanyal’s dad, Ronnie, a Manager at Midlands Golf Superstore in Nuneaton, watching his son rise up the ranks in golf has filled him with pride.
“I am extremely proud of Daanyal’s achievements to date; he has dedicated himself to his golf,” he says.
“He has given up a lot to stay focused and fit and gone through many setbacks to get to where he is today. We always wanted Daanyal to have the chance to fulfill his goals, and myself and my wife and family have all been behind him.
“I want Daanyal to enjoy what he does and to be proud of his background and we will see what the future holds.”
You can follow Daanyal’s progress on Twitter: @DaanyalSpalding


Anybody wishing to sponsor Daanyal can contact 07876244423 for further information.

9 software to boost their sext existence. Sexting was flirting when it comes down to 21st millennium.

Match Evaluation: May Be The Membership Worth The Terms?

Caldera Records To Release Musical Score From The Black Prince