Sri Lankan fans in for treat 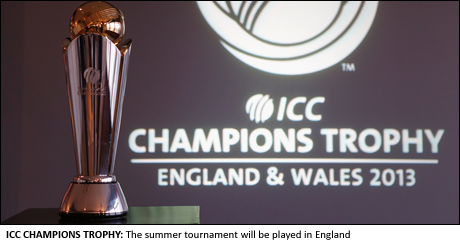 2013 promises to be a feast of cricket.
With the prestigious ICC Champions Trophy taking place in England and Wales in June, there will be plenty of top class, live action for Sri Lankan cricket fans to get excited about.
The ICC Champions Trophy 2013 features the eight best one day international teams in the world, with Sri Lanka drawn in the same group as England, Australia and New Zealand.
The Cardiff Wales Stadium will play host to Sri Lanka’s first match of the group against New Zealand on Sunday 9 June. To be the first to find out all the ticket news you can register your details at www.icc-cricket.com
The Oval in London is the scene for Sri Lanka’s remaining group matches with one of the most eagerly awaited clashes featuring England and Sri Lanka on Thursday 13 June. Sri Lanka will finish the group against Australia on Monday 17 June, with the two sides meeting for the first time since their recent thrilling ODI series which was drawn 2-2.
A top one-day international match will be played every day during the group stage in Birmingham, Cardiff or London, so cricket fans from all over the country will have the chance to watch every ball live and support their national team, with the likes of Kumar Sangakkara, Michael Clarke and MS Dhoni all in action.
The top two in each group progress to a semi-final, and the winners of the semis meet in the Final. The tournament begins on Thursday 6 June 2013 when India face South Africa in Cardiff, and closes with the Final on Sunday 23 June 2013 at Edgbaston.
The tournament sees the introduction of tickets for under-21s for the first time, priced from £10-£25, while tickets for under-16s are £5 for the entire tournament. Adult tickets are priced in three categories – Gold, Silver and Family Stand – and range from £20 (for a group game in the Family Stands) up to £60 (Gold ticket for the Final).  This means a family of four can watch a live match in the group stages from only £50.
Tournament Director, Steve Elworthy, said: “This will be a terrific opportunity for fans to see the world’s very best One-Day sides in action over the space of less than three weeks and the fixture schedule has thrown up a host of exciting head-to-head contests.
“The format means every match counts and all eight teams will feel they are capable of winning the tournament in a competition which is set to be one of the highlights of the 2013 international calendar.”
Celebrate Sri Lanka’s Independence Day by picking up tickets to watch Sri Lanka live at the 2013 ICC Champions Trophy
Fans can buy tickets now at www.icc-cricket.com and via 0844 249 2013.

We now have simply caused it to be better to pick NSA hookups in...