Home News Around the World in 44 Days! 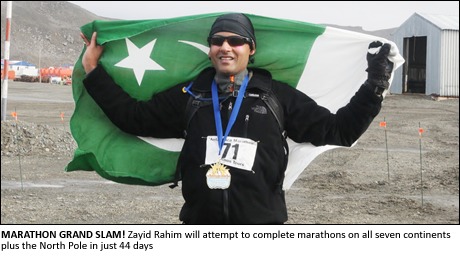 IT’S described as a marathon like no other – the ‘Grand Slam’ entails completing a marathon on all 7 continents of the world plus the North Pole – and one man who hopes to complete it in just 44 days is seasoned marathon runner Ziyad Rahim.
To understand the gravity of Ziyad’s challenge, just take a look at the current world record held for completing a marathon on all seven continents and the North Pole. It’s 324 days and has stood since February 2007 when American Ginny Turner undertook the challenge.
Yet Ziyad hopes to compete it in just 44 days. Starting in Antarctica on February 25th, Ziyad will attempt to complete Marathons in Antarctica, Chile, Cyprus, LA, New Zealand, South Africa, Jordan and finally at the geographic North Pole (90N) on April 9th.
As Ambassador for CARE, a charity in Pakistan which provides free education to over 160,000 children in 225 schools across Pakistan, Ziyad is hoping his marathon trek will help raise vital funds for the charity.
Yet this challenge won’t be the first time Ziyad as pushed the limits of his own body for charity. In 2010 he ran three marathons in consecutive weeks to help raise funds for the Pakistani flood victims that affected over 20 million people.
“I want to raise funds for the less fortunate,” he tells The Asian Today, “as well as promoting a positive image of my country and religion globally, which lately has been attracting attention for the wrong reasons.”
As Pakistan’s first and only runner to complete a marathon on all seven continents of the world, Ziyad has already experienced the very worst of conditions when it comes to marathon running.
Just last year he became the first person to person in the world to complete two extreme ultra-marathons; in Antarctica (-20c) and Sahara desert (+50c) within one month.
And he knows his latest challenge will see him confront once again the very extremes.
He says: “Some of my races will take place in 30c heat while temperatures in Antarctica and the North Pole can drop down to minus 50c. The North Pole marathon is the only marathon that is not run on land; but on the frozen Arctic Ocean at 90N in extreme temperatures.
“Travelling as well as jet lag will be another big challenge in attempting this record. Due to work and family commitments, most of my journeys will be over the weekend. The flying time including transits over the 8 week period would be between 300 to 330 hours. My trips to Los Angeles, Auckland, Cape Town and Cyprus would be weekend trips. So, I would primarily be flying for 20 odd hours, run the marathon and immediately fly back another 20 plus hours to get back to the office.”
You can sponsor Ziyad on the following link: https://mydonate.bt.com/events/marathongrandslam2013
You can also follow Ziyad’s journey on his Facebook page (z marathon).