Home Uncategorised Make your war to the ‘Urban Temple’ with Shivali 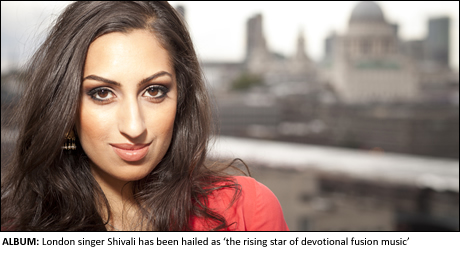 FOLLOWING on from the incredible success of her debut album ‘The Bhajan Project’, the immensely talented singer Shivali, now reveals a new dimension in devotion with her latest album ‘Urban Temple’.
‘Urban Temple’ is a stunning collection of devotional songs set against a contemporary background of beautiful melodies; a blend of traditional bhajans and mantras with shades of RnB, Soul, Rock and Pop.
The first two tracks from the album ‘Vaishnava Janato’ and ‘Hari Sundar’, released earlier this year received huge acclaim, with Shivali being hailed as ‘the rising star of devotional fusion music’.
Born and raised in London, Shivali took up singing professionally at an early age; her strong connection to India led her towards music with spiritual rhythms and tones. At first glance, you might regard Shivali as a fashionable pop-diva, but when she sings, the devotion is unquestionable and contagious. She believes the best way to illustrate her love for God is through producing music that can help many to bond with the Divine in the modern world.
She says of the album: “Urban Temple is a reflection of my own personal journey; merging my western background with my Indian roots. The music is the western side of my upbringing, and the lyrics are a direct result of my discovering the core of my roots and the spirituality it inspires in me. I feel truly blessed to be in this unique position and want to share it with others.”
Shivali’s positive attitude, immense passion and devotion for the Lord promise to delight and inspire all who listen to the album.
Urban Temple is released through Eros Now Music and is available now via iTunes.