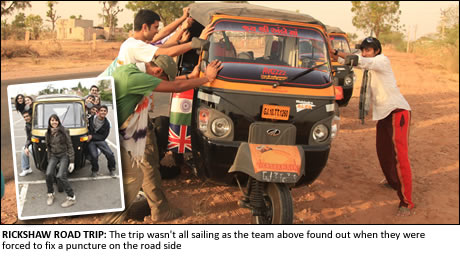 A TEAM of British ‘rickshawalas’ have returned home from a remarkable charity trek across India.
The group of nine – five guys and four girls – embarked on a 12-day Rickshaw adventure to take them through India, covering the states of Gujarat, Rajasthan, Haryana, Punjab and ending in Himachal Pradesh.
The journey saw the group drive three auto-rickshaws through 1800 km of notorious Indian traffic, pot-hole ridden highways and crazy truck drivers.
And while it was certainly an adventure for the group, it was all done for a good cause.
The trip was undertaken in aid of a UK based charity, CAREducation Trust, a grassroots charity which looks after more than 6000 children in various parts of the world
The Rickshawalas started in Bhuj, Gujarat at the first CARE supported centre and ended in Manali, at the Himalayan Buddhist Cultural School (HBCS), which is where the funds raised are being donated.
The team enjoyed somewhat celebrity status as they treked across India!
They received excellent support from the press, being featured in the Times of India, Hindustan Times, Punjab News Express and Divya Bhasker, not to mention receiving a personal letter from Narendra Modi, Chief Minister of Gujarat, wishing them luck on this journey of a lifetime!
Now that they have completed the Rickshaw Run, their aim of raising £30,000 is now over halfway there, to help to increase the facilities at the HBCS, Manali.
“For the first time in my life I feel like I have achieved something, and seeing the smiles on the children’s faces just made the whole trip worth it,” said Team Leader Nirav Shah.
“A huge credit to an amazing multi-talented team and a life changing experience for us all.”
The Rickshawalas journey was all captured on video that will be released as a documentary in due course.
Donations continue to be accepted through: www.justgiving.com/careyouth