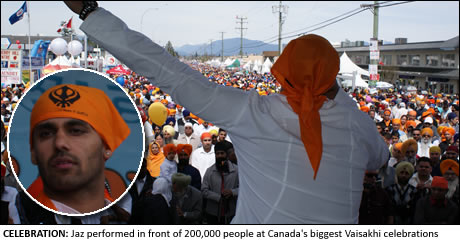 BIRMINGHAM Bhangra star Jaz Dhami was the star attraction at Canada’s biggest Vaisakhi celebrations.
Over 200,000 people took to the streets in Surrey, a city in the province of British Columbia, Canada, to celebrate the Sikh festival.
The city came to a standstill as a sea of people took part in a procession called Nagar Kirtan.
And Birmingham’s finest Bhangra star Jaz was there to join in on the celebrations as he became the first British artist to perform for the crowd with a selection of religious and inspirational songs.
Speaking exclusively to The Asian Today from Canada, a delighted Jaz described the experience as one of the most “memorable performances” of his career.
“Surrey Nagar Kirtan will be one of the most memorable performances of my career, it was like a dream come true,” he said.
“No words can explain the feeling I got when I first walked on stage. I felt myself being in another place and going into something that I’ve never experienced before. It was like a constant buzz, a spiritual energy telling me that this is what real music is and who I am.
“It was a beautiful day, colour everywhere, people listening attentively and I just performed songs straight from my heart.”
As Jaz rocked Canada, there were similar celebrations in his hometown of Birmingham, and the star revealed he would have loved to have celebrated Vaisakhi on the streets he calls home.
“It would’ve been great to celebrate Vaisakhi in my home town but both celebratory events coincidentally fell on the same weekend this year,” he said.
“I’d always heard so much about the Surrey Nagar Kirtan and the atmosphere there. It’s also one of the biggest Vaisakhi procession’s outside of India, all of this intrigued me and I wanted to experience the vibe for myself.”
He added: “I’ve always been lucky enough to spend Vaisakhi with my family and I want it to remain that way. It’s a significant day in the history of my faith and I think it’s important to remind ourselves of that and be thankful for the sacrifices made by our forefathers.

“Vaisakhi will always be held in high regard for me and I hope I get to serve my community on this special day through my music throughout my career.”