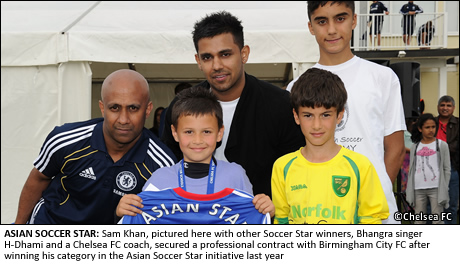 A YOUNG football star from Coventry has hailed the impact of Chelsea Football Club’s Asian Soccer Star talent search on his life as the club launched the fourth year of the groundbreaking initiative.
The west London club became the first Premiership club to offer British Asian youngsters the chance to win trials at the club when it launched Asian Soccer Star in 2009.
Since then around 1000 children have competed to impress Chelsea FC Foundation coaches and scouts from the Chelsea FC Academy system.
The initiative is open to players in Under 9, 10, 11 and 12 age groups from Indian, Pakistani, Sri Lankan and Bangladeshi backgrounds.
One youngster who saw his life change after taking part in the talent search is Sam Khan.
The Coventry lad entered the competition last year and was crowned the winner in the Under-9s category after impressing Chelsea officials at the club’s state-of-the-art training ground in Cobham.
A year later and things are definitely looking up for Sam after signing a professional contract with Birmingham City FC.
“Asian Star is really important because it gives young players the chance to get themselves noticed,” the youngster said.
“It was a perfect day; it was great and gave me one of the best experiences of my life. It helped me gain confidence because of the coaches’ comments about me. That helped me shine more and I was spotted by Birmingham and given a trial and then my contract.”
The competition returns this year with Chelsea FC keen to provide more ground-breaking opportunities for aspiring footballers from Asian communities.
Since its inauguration the programme has already identified five potential stars of the future who have gone on to play for professional clubs’ academies.
Previous winners of the competition were given the chance to trial for the Chelsea Academy but to ensure aspiring players get the best possible coaching, this year’s initiative is offering a year-long placement on one of the Chelsea FC Foundation’s Elite Training Centres.
The club will also be inviting managers, coaches and scouts from clubs at all levels of the game to identify talented youngsters and information will also be on hand for Asian players to find clubs in their area.
French international and Chelsea player Florent Malouda said the competition was pivotal in identifying potential Asian football stars of the future.
“Asian Star is a fantastic initiative which is making a real difference to Asian participation in football,” he said.
“Aspiring footballers should have the same opportunities regardless of their background and this programme gives Asian footballers the chance to play and potentially be recognised as tomorrow’s professional footballers.”
Asian Star 2012 will take place on Saturday 26 May. Applications for this year’s tournament are now open, visit www.chelseafc.com/asianstar to enter.

Getting serious with Manni Tamber

Most useful online payday loans nc. Not exclusively may appliance procedures for a primary funding fast

Has Lindsay Lohan Converted to Islam?